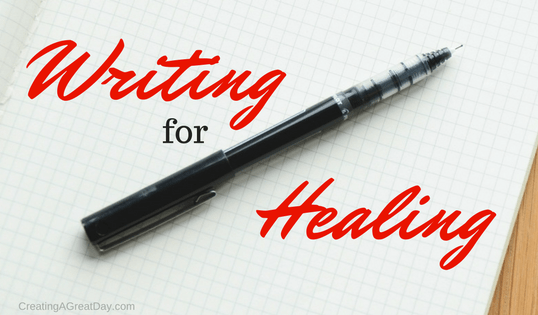 Believe it or not, I’m not an avid writer.

I did not enjoy writing in college and never thought I would do it in my spare time.

A few years ago, my opinion of writing changed.  I had lost my grandfather for whom I had been a primary caregiver for several years.  At the time, this was the most difficult thing I had ever experienced because I had not dealt with prior grief.  If one does not deal with grief when it occurs, it continues to build and just gets worse.

While I was attending a grief support group, the facilitator, a wonderful Christian woman, suggested that I write my feelings in letter form to those who had caused me pain and anger, including my grandfather.  I was not to mail these letters, just to write them.  I thought this woman was crazy.  What good was it to write a letter? How would I find healing from my grief through a letter?

After being told this several times, I decided to try it.  Nothing was helping me cope and I knew my emotions were building.  One day, I sat down with a notebook and pen and started to write, and the words just poured out.  I wrote with such intensity and fury.  I didn’t know where it was all coming from.  In twenty minutes, I wrote eight pages to three people.  The emotional release I felt was unbelievable.  Everything came out.  It really did work!

Since that day, I continue to use this method for other issues in my life.  I often go back and add Bible verses in the margins when applicable.  I have even written letters to God.  This is my new-found therapy.  Pen and paper are a lot cheaper than a therapist!

If you are afraid of someone reading the letter, you can burn or shred it when you are finished.  I found that to be another healing aspect.  It symbolizes letting go.

Releasing Our Anger and Emotions

Remember, anger hurts us.  It separates us from God.  Satan is always trying to find ways to destroy us.  Ephesians 4:26-27 says,

“Be angry, and yet do not sin; do not let the sun go down on your anger, and do not give the devil an opportunity.”

We need to let our emotions out, not bottle them up.

Do you have an issue you can’t let go?

This is a great idea! I’ve done this before when I was really upset with someone. I wrote the letter but never mailed it. It was very healing and therapeutic to write the letter and get my thoughts on paper. I think it helps you process things!

Yes, it really does help.

I’m glad you found healing. I was the primary caregiver for my grandma. It’s nice to find someone else who has done the same at a young age.

Yes, it’s not anything that I expected to do, but my husband, children, and I have some of the best memories. My grandfather died almost 8 years ago but today, my 15 year old daughter started talking about his funeral. I was surprised by how much she remembered. He had such an impact on our lives.

This is such a great suggestion. I’ve never tried the technique before, but I am definitely going to start now. Thanks for sharing your experience!

It really did help me. I pray that it works for you.

This also works for recurring bad dreams. Write out an alternative ending and your brain accepts it as a done deal!

Great idea! Thank you for sharing.

Writing is such great therapy in many ways!!

I’ve always found writing letters to be a great way to let go of something if I’m having trouble! So glad to hear it worked for you too!

This is so true. When I am most frustrated and filled with anxiety, that is when i know I need to write. I try to at least get 500 words out without thinking about it. It really helps to relieve stress

I just write what comes flowing out. Sometimes, I write so hard, it presses through several sheets of paper. I think that is the stress leaving.