Worth, Society, and God 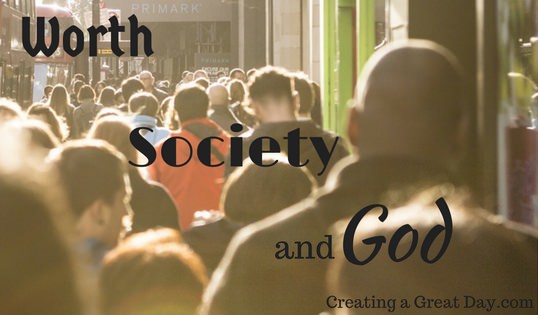 A Nation in Pain

My husband and I were attending an equipping session for a ministry at our church. One of the leaders was reviewing what’s important within the ministry, and the term worth came up. He continued to talk, but this word worth stopped me. I finally had a word to explain what has bothered me for the past few months. I didn’t know what to say and how to say it, but this word worth unlocked my feelings about topics that have affected people across this nation.

Our nation is in pain. Racism, violence (including murder of police officers), and terrorism are a few of the events that have plagued our nation as of late. For those who don’t know, my husband and I adopted our son (who’s black) last year. These national events hurt me as a Christian, but they resonate with me on a more personal level. I’ve gone to bed, fearing that my son might someday lose his life because of how people judge him. What gives someone the right to love my son differently because he looks different than I do? Don’t we all bring our unique characteristics about life and love to our families, our churches, and our communities?

Society’s View of Worth

Then it hit me. WORTH. I am frustrated because society has started to assign a level of “worth” to others based on worldly characteristics: race, religion, job title, money, political power. This isn’t new, but I think society (as of late) maybe has taken more of a public and extreme view of how they show their feelings about one’s worth.

I keep repeating these questions to myself:
• When did we decide that loving someone based on what they look like is an appropriate, Godly view of worthiness?
• When is it righteous to shoot someone based on personal beliefs or choices?
• When did we start intentionally targeting others (a.k.a. police officers, those of different races, those of different religions) because we believe we have some higher “duty” to exact revenge?

God’s View of Worth

I think what bothers me the most is that people believe it is our job to determine one’s worthiness. Spoiler alert–GOD HAS ALREADY DONE THAT. Through his son, He became flesh, died, and returned to the heavens because He believes we are worthy enough to be His sons and daughters. He believes we are worthy enough to have a seat at His table and to enter His kingdom. HE has given us that level of worth. HE has made us in His image and declared us His image bearers. It is not our right to take that worth from someone else. He has called us to make disciples and help bring people into His kingdom, not isolate them based on our own prejudicial feelings.

Called to a Higher Standard

Now, can people forsake that image? Yes. Can people live their lives in a way that dishonors God and the worthiness/value that He has given us? Most definitely. Does that give us the right to play God and condemn/sentence the sinner and the sin simultaneously? NO. At times that can be hard. Really hard. Don’t get me wrong, I am not saying that I feel comfortable opening my front door to terrorists and feeding them a meal. That being said, don’t you think that God calls me to look past their hate, look past their sin, and see what He originally created? Doesn’t he call us to separate the sin from the sinner long enough to see the worth and value that He sees in that person?

One of my friends coined a phrase a few months ago called “both/and.” I love it. I feel like our society is either too fluid or too rigid. Can’t we live in a “both/and” world, where we condemn the sin but pray for the sinner, asking God for him to come back into the fold and embrace the Father again? Are we so tied to a person’s race, job, feelings, or actions that we can’t see past what they are to see the worth and value God has given them?

Let me detour just slightly for a moment and talk about “self-worth.” This is mainly for women. I have a little message for you guys. YOU HAVE ALREADY MADE THE A-LIST. GOD CREATED IT, AND YOU ARE ON IT. God has bestowed a worth upon us that only He can offer. Please don’t measure your worth by other people’s opinions or what they consider to be “worthy” of their attention. We are fearfully and wonderfully made by God. He has deemed us worthy and given us a seat at His table before we were even born. So please don’t attempt to measure up to what society says you should be. Step into the light, declare Jesus as the Lord of your life, and accept the worth that he has already given you. You don’t have to earn it. Godly worth is given. It is your job to receive it.

How Will We Define a Person’s Worth?

Even though I have discussed a couple of angles about worth and our society’s view of it, hopefully one of these “angles” or “perspectives” has spoken to you. People, we need to do better. God calls us to do better. We are living in a society that is on the edge of becoming something great or falling into a pitfall that may take us generations to recover. Spiritual warfare is among us. Are we going to love people based on the worth that God has already given them, or are we going to cast aside that worth and only love people through the lens that society has placed before us? It’s our time to choose. 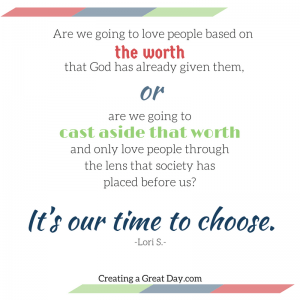 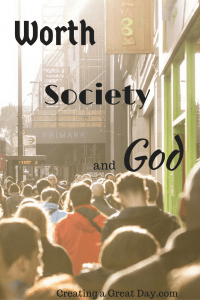 Lori S
I'm Lori! My husband and I have been married since 2008. We adopted our son in July and live in Memphis, TN. One of the things I love about Creating a Great Day is that it is focused on inspiring women to the woman that God wants them to be. Every woman is different, and we all have talents to honor God and walk alongside each other in this spiritual journey called life. Have a blessed day!

Our worth should only be found in His eyes!

Yes! It’s such a hard concept to embrace and live out. I hope to improve on this in my own life.

I love that you layout it for us the difference between Gods worth and the worlds worth seeing how God’s is more important.

I have been struggling with how this country has been acting for a long time. Thankful for my family and Christian community that has helped me formulate my thoughts and express them.

I am so glad to be created in God’s Image. And I know that every other person is created in His image. My prayer is that everyone will turn from their sin to follow Jesus whole-heartedly. Yes, spiritual warfare IS among us big time. I want to love people as Jesus loves us.

Yes! I think that is what’s so hard about this blog. People struggle to love others as Christ does, for a number of reasons. One of those reasons is Satan. We all need to reflect on spiritual warfare and how it may be present in our lives.

Lori, this is a much needed discussion for us all. I have been wishing and praying for people to know their true worth and Who gives it to them. Thank you for this post.

The statement is so encouraging to me! May we all focus on viewing others through a more Godly lens.

This is such a great reminder. None of us realizes just how precious everyone really is.

Our nation definitely is in pain. We are all created in God’s image. The variety is what makes us special and helps encompass many facets of God.

I think that is what makes it so hard! We get angry or don’t agree with members of society, yet we have to remember that those people were made in the image of God…not just us! We are still called to love, just the same.

I’ve been thinking a lot lately about honor, which ties into your discussion of worth. Honoring people is treating them as if they have worth. Even when we disagree with people or when they are not living out their calling, we can still treat them with honor.

What an awesome word to pair with worth. Thank you for sharing!

“Worth” is such a good word to meditate on. Just like our paper money has no value of its own, only that purchasing power granted to it of the government behind it, so we all have our worth granted to us by the awesome One who created us. In divisive times such as these, it is good to remind ourselves that we, and those who disagree with us, all have amazing worth through Almighty God.

Very true. It’s not that we dismiss the problems happening, because these societal issues need to be addressed. Hopefully by remembering who we serve, we can recognize the worth that has already been given to people.

I am so glad that God more than just accepts us—He also says we are WONDERFUL! 🙂

[…] If we continue to allow labels to divide us as a nation, we cannot continue to exist.  Our country is in turmoil right now.  There are constant riots.  Ugliness surrounds the election and politics in general.  The wage gap between men and women is yet another point of contention.  Denominations bicker amongst themselves.  All these things have led to a division in our nation.  We are tearing our nation apart with all this. […]

Yes! We must strive for unity once again.