Lana W
I’m Lana, a native Oklahoman. Married 17 years to the first boy I ever dated. Mama to two amazing, darling girls. I’m a coffee-drinking, book-reading, home-educating night owl! An accountant in my life B.C. (Before Children), my dream job would be getting paid to read all day.And if you’re into Meyers-Briggs personality tests, I’m an ISTJ. Most important of all, I’m a follower of Christ.

New Year’s Traditions Around the World

All around the world, New Year’s Day is a day for new beginnings.  Along with setting resolutions and taking down the holiday decorations, several traditions have evolved that are said to bring good luck or prosperity. For example, in Spain the tradition is to eat twelve grapes, one for each month. In France, the new year is celebrated with a stack of pancakes. Here in the southern United States, it’s a common tradition to eat black-eyed peas on New Year’s Day.  Supposedly it brings good luck for the new year, but I’ve always held the opinion that I’d rather have bad luck than eat a single black-eyed pea!

My opinion of black-eyed peas changed once I tasted this soup, however! Bacon, ham, and liquid smoke all combine t

o create a delicious, hearty soup.  Even better, there’s hardly any prep work involved. Just open a few pantry and freezer staples, and in the time it takes to heat up some crusty bread and toss a salad, you’ll have a quick, filling supper.

In a large pot add green beans and uncooked bacon.

Frozen green beans and chopped bacon in a large stockpot are the beginning of a delicious dinner!

Add enough water (approximately 2 quarts) to cover completely. Bring to a boil and boil until the bacon is cooked. (Note: the bacon will not get brown and crispy as it would if pan-fried. Some of the fat will render into the soup and the meaty part of the bacon will start to look cooked.) 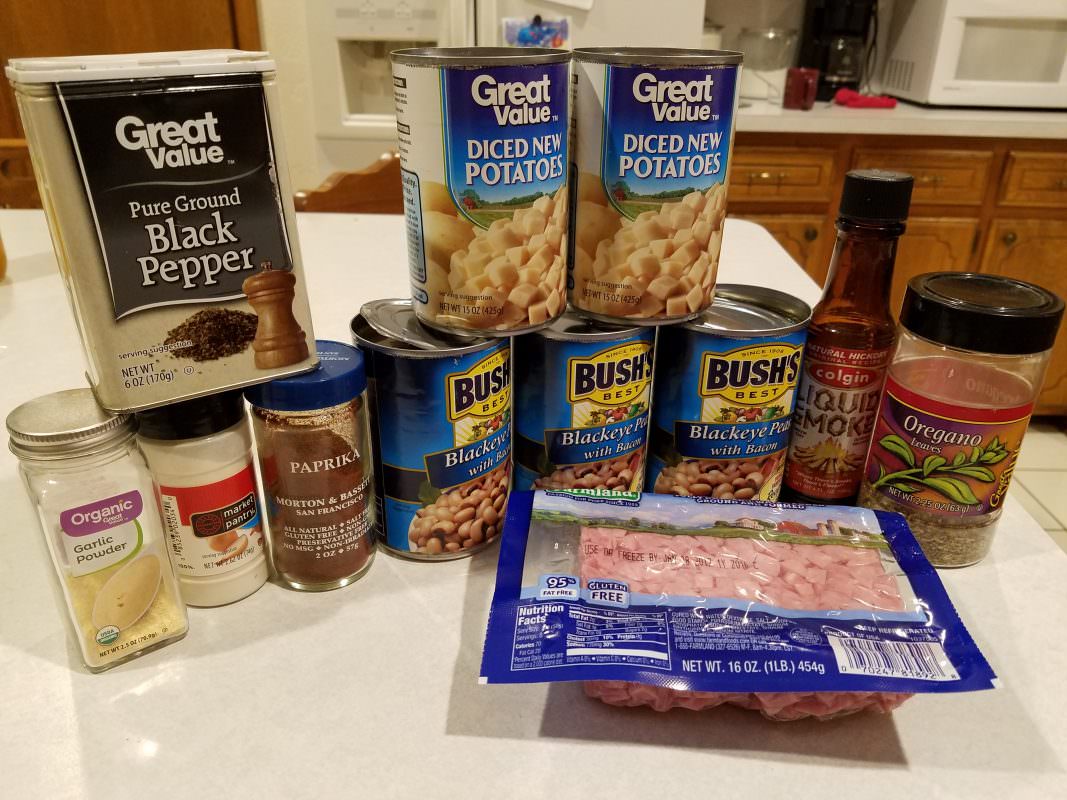 Pantry staples make for a huge amount of inexpensive soup!

Add the seasonings and all remaining ingredients.  Cook over medium high heat until broth begins to get thick, about 30 minutes. Serve with tossed salad and crusty bread if desired.

Black-eyed peas are one option, but there are several other foods that people believe can bring good luck or prosperity in the new year.  People in the South also eat collard or other greens to bring wealth, since the greens symbolize the green of money. It might be fun for your whole family to investigate New Year’s traditions from other parts of the United States, or even from around the world. Maybe you will find some fun ideas to create your own New Year’s traditions…just don’t forget to eat your black-eyed pea soup!

What are your family’s New Year’s traditions?