Trees are the Answer: Questioning Adversity 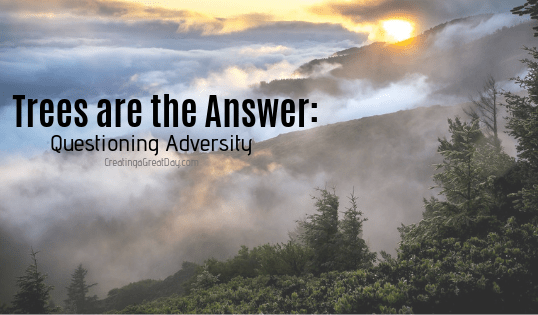 Trees are the Answer?

A true story was told concerning a bold venture to grow the strongest possible trees, which would then be made available for purchase. The saplings were planted inside a large, domed stadium to protect this
young forest from inclement weather. In fact, these trees received every possible nourishment and protection, and after the proper lapse of time, the trees were made available for transplant.

As it turns out, this venture was an abject failure.

The trees proved to be as fragile as thin glass, with limbs breaking under the slightest pressure.

In trying to mitigate all risk, the aborists had noble intentions, but they failed to take into account the benefits of naturally occurring, contrasting winds. Strength and resilience developed only in presence of wind pressure. To remove external pressure removed internal strength.

Are we resisting God’s goodness?

All adversity involves real risk that it will not go well. But in that risk also lies the opportunity for previously unknown growth. Perhaps in seeking to build a dome and resist natural adversity, we also resist God’s goodness for our lives.

Through breeze and storm, we are storytellers in our own lives, narrating our experiences and coloring our tales with various emotional shades. Our inner voice interprets the trials of life to explain events that challenge us.

In this task we must prophecy over ourselves based on the wisdom of both nature and Scripture. We must whisper in our own ear,

The God who loves us is developing our strength. We will not be children made of glass timber, but will be mighty in the tempest. This adversity is my opportunity for unforeseen growth.

Will we take the opportunity to grow in faith?

When presented with the opportunity to grow in faith while traversing the desert, the Israelites failed. They complained of bitter hardships, despised the heavenly manna, and longed for “free” Egyptian food and meat. The people rejected the opportunity in their adversity, aborting their growth and resulting in a severe plague (Numbers 11). Not all challenges go well.

Perhaps you, like me, had never looked at the synonyms for complaining, but the words seem to be reproaches unto themselves:

Conceived in the mind and birthed with the mouth, these verbs are deadly.

The book of James compares the tongue to the rudder of a ship which steers its course; likewise, complaining steers the course of adversity away from its proper destination of God’s goodness and into the peril of plague. Looking in faith towards the goodness of God in the midst of adversity allows his providence to meet us in our desert of need.

What is the poison and the antidote?

In the case of adversity, verbs are both the poison and the antidote. The antidote to poisonous complaining is found in the antonyms of complaining: Appreciating, enjoying, and praising, which sounds remarkably like Psalms 100:4:

“Enter his gates with thanksgiving and his courts with praise; give thanks to him and praise his name.”

Once, when diligently pursuing God, I prayed that he would remove the scales from my eyes so that I could see him, and a still, quiet voice said,

“Thanksgiving removes the scales from your eyes so you can
see God.”

Later that weekend at a women’s conference, the main speaker declared these very words from the stage.

Oftentimes in the midst of adversity we are in such turmoil and angst that God seems ever far away, not the God who is near. We can’t see God.

Thanksgiving not only reminds us of his goodness to know his nearness in our pain, but it is also a safeguard to protect our hearts from bitter despair.

Likewise, praise raises our eyes in hope, knowing that his goodness and power are abundantly sufficient for the trials we face.

More than that, praise sets the stage for miracles.

My favorite example of this principle is found in II Chronicles 20 which describes three vast armies that came to wage war against King Jehoshaphat. Alarmed, Jehoshaphat determined to inquire of the Lord,
concluding in prayer,

“We have no power to face this vast army that is attacking us. We do not know what to do, but our eyes are on you.”

The next day Jehoshaphat demonstrated his faith that the battle
belonged to the Lord by sending out – not the cavalry – but praise teams to lead his army. From what happened next, it appears that their worship activated God’s saving might. Verse 22 states,

“As they began to sing and praise, the Lord set ambushes against the men of Ammon and Moab and Mount Seir who were invading Judah, and they were defeated.”

What might have happened if Jehoshaphat had met his time of adversity without inquiry, without faith, without song? Would the nation have forfeited God’s goodness that was waiting for them in song at that moment of trial?

Trees are the Answer.

Going back to our planters of domed trees, they would have benefited from the perspective of an eminent Indian scientist, Professor Sir Jagadis Chandra Bose. He had already concluded one hundred years earlier,

“A plant carefully protected under glass from outside shocks looks sleek and flourishing but its higher nervous function is then found to be atrophied… Is it not the shocks of adversity and not cotton wool protection that evolve true manhood?”

“We will in all things grow up into Christ Himself, who is the head” (Ephesians 4:15).

Thanksgiving circumvents adverse outcomes during this risky but necessary process, and praise ushers us into the King’s holy presence, the place where all power lies to overcome adversity.

My husband and I once saw a bumper sticker we never forgot: TREES ARE THE ANSWER. We weren’t sure what the question was, but now as we reflect on adversity, joy, and strength, we are ready to boldly proclaim,

“Trees Are The Answer!”