Thou Shalt Not Eat…

…Bacon.  Okay, I know that is not one of the Ten Commandments.  But it is in the Bible, kind of.

Before we get into that, I will give you some background.  Yes, I do understand that we are no longer under the Law and that Jesus came to fulfill the Law.  We are not saved by the Law but by faith.  Galatians 2:19-20 states,

“For through the Law I died to the Law, so that I might live to God. I have been crucified with Christ; and it is no longer I who live, but Christ lives in me; and the life which I now live in the flesh I live by faith in the Son of God, who loved me and gave Himself up for me.”

I’ll start with a little background information on why I believe the way I do.  I was raised in a denomination that followed Old Testament dietary laws.  Even though I am no longer a part of that denomination, those teachings have stayed with me.  So, the Bible does tell us not to eat pork.  Leviticus 11:1-8 (NASB) states,

Verse seven specifically states that we are not to eat pig.  It is in the Bible.  It then goes on to list all the foods that are considered “unclean.”

We really need to be aware of what we put in our bodies.  Not only do these animals carry disease but the way much of it is processed is not good for us.  Just look at the additives  for bacon, hot dogs, and ham.  Many of these additives are not good for us.

I am not condemning anyone who chooses to eat these animals.  I do not make a big deal about it when I’m with people who do not know me well.  I can usually make adjustments if I’m in a situation where there are not many food options for me and I never try to make anyone feel bad about what they try to serve me.

I love the story about my grandmother while she was visiting her in-laws.  They served a ham for dinner one night and then realized that she did not eat pork.  When she did not take any, they realized their mistake and went and fixed her fish.  The only problem with the fish was that it was catfish!  Catfish is also considered unclean.  She never said a word and proceeded to eat it.  I too have been in that situation and never said a word.  I know that I am not condemned because of those meals.

This is something of which I feel convicted and as such feel that I will have to answer before God.  I know many will not understand this and not agree with it.  I do understand that this is a result of my upbringing, but we are all a result of our bringing and have different thoughts and beliefs because of it.

So whether you eat or drink or whatever you do, do it all for the glory of God.
-Paul, 1 Corinthians 10:31

Do not eat “unclean” animals.  This does not just mean pork.  God laid out an entire list of animals that we must not eat.

Like I stated earlier, I understand that we are no longer under the Law, but we have to remember that God gave us the Law for a reason.  These animals were considered unclean because they carried disease and/or were scavengers that ate any and everything.  God did not make up the Law arbitrarily.  He did it for our own protection.  The animals that are unclean are not healthy for us.

Salt and pepper to taste

By the way, I do eat bacon.  I eat turkey bacon!  You can sprinkle cooked, crumbled nitrate-free bacon over the top of the green bean dish. 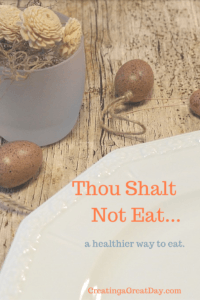 Is It Real? | Creating a Great Day