The Opportunity in Breaking Down 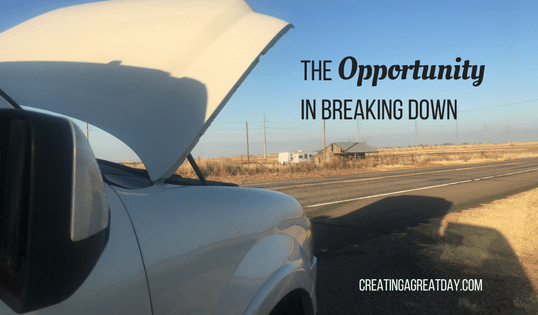 While passing a truck on a two lane highway in the middle of west Texas, smoke started billowing out from under the hood. I had no idea what happened. As I pulled over, I knew beyond a shadow of a doubt that I was just given an opportunity. Yes, there can be an opportunity in breaking down and it’s all in how we perceive our situation. 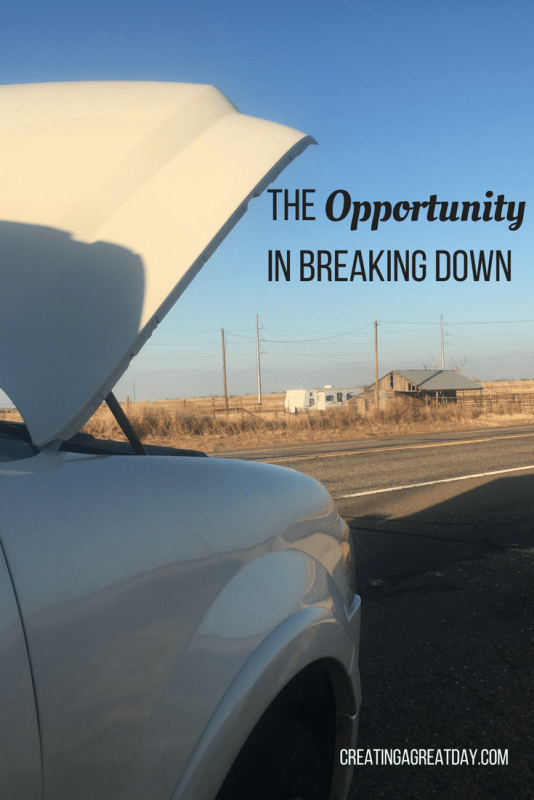 The Opportunity of Breaking Down

After making sure each child was safely out of the vehicle, I began to praise God that he had chosen this moment as the best time for my SUV to break down. That may sound weird, but my original plan was to drive to Oklahoma from Texas a few days later. Those plans changed when my parents decided to come to Texas to see their granddaughter’s robotics competition.

Because they chose to come to the competition, I decided to follow them home instead of waiting until later in the week. I am so thankful for this decision. Otherwise, I would have been in the middle of west Texas by myself with 5 kids trying to figure out what happened to my SUV.

Playing in the West Texas Countryside. I was so thankful my parents were with us.

As I was on the phone with roadside assistance, an image came to mind…basically it was a visual representation of the following scripture:

“When they came up out of the water, the Spirit of the Lord suddenly took Philip away, and the eunuch did not see him again, but went on his way rejoicing. Philip, however, appeared at Azotus and traveled about, preaching the gospel in all the towns until he reached Caesarea.”
Acts 8:39-40

All of a sudden I saw the opportunity in breaking down on the side of the road in the middle of nowhere. It had everything to do with looking for God’s will in this moment. God knew this would happen, so what does he expect me to do here? He expects me to do what we are all called to do – share the good news!

Because my vehicle broke down, I was forced to stop in a town and talk with people that I would have just passed by without a second thought. It would have been way cooler to have been whisked away and miraculously appear in Childress, TX, but my SUV breaking down had a similar result.

Who am I supposed to talk to?

I felt certain that I was supposed to talk to someone about their faith but since I didn’t know who, I tried to engage everyone I came in contact with.

As the tow truck driver gave me the low down on the mechanics in the area, I pondered how to engage him about our Savior & faith.

Wilson’s is great but he doesn’t work on Saturday evenings or Sundays. He does live on the corner so you can try to catch him at home.

There is a mechanic on the edge of town who does great work but he rips people off.

There is a guy who hangs around O’Reilly’s and helps fix cars. He might be able to help, if Wilson can’t help you on Sunday.

After basic introductions and some other small talk, I gathered my courage and inquired:

It may sound strange and you don’t have to answer if you don’t wan to, but I love hearing how God is working in people’s lives. How have you seen Him working in your life lately?

He thought about this for a second and then said,

“I go to church but I can’t say I really see God working in my life.”

I nodded, remembering when I felt the same way and gently responded:

“I believe God works even in the small details of our days.  For example, my parents were not supposed to be here, but at the last minute they decided to come to my daughter’s tournament in Lubbuck. Because of that, they were here to help me when my vehicle broke down. Plus, the fact that  you were able to come pick us up with a tow truck that wasn’t yours and this truck just happened to have a jump start kit that isn’t normally there, so you were able jump start my parents car when it’s battery died. I think God shows up even in these details. He knew what would happen while I was driving. God has shown up for me in the details in a BIG way today. Sometimes, I think we just have to be open to believing that God works in our daily lives and then we start to see how He works in the details.”

(Yes, my parent’s battery died while we were waiting for the tow truck to come. At that point, ya just gotta laugh, right!?!)

Wilson’s seemed like the only mechanic available that was good and wouldn’t rip me off. The only problem was, I couldn’t get a hold of Wilson. Even knocking on his door didn’t help. So, I started praying, wondering what I could do.  Then the idea hit me to call a local congregation and see if they knew of someone who could help.

The lady who answered the phone was so helpful! After asking around she, shared that many people in their congregation used Danny’s Transmission. I quickly told her,

“I heard Danny died. Is he alive?”

She and I both laughed at what had just spilled out of my mouth. Since she was newer to town she wasn’t for sure about Danny, but his shop was open, so I decided to call.

The man I heard was dead was actually alive!

Poor Danny has not even been sick and had no idea why that rumor was going around. Thankfully, Danny was alive and well and he was willing to help with my vehicle. After taking a look under the hood, he shook his head and said,

“You won’t be able to get the part you need here. I worked on the same model SUV yesterday and we had to get the part from Wichita Falls. But if O’Reilly’s has a certain “T,” I can fix the problem.”

I immediately reached out to one of my prayer groups.

Hey ladies! Say a prayer that Danny ( pray specifically) can find the part to fix my truck.
I blew a hose outside of Matador, TX yesterday and we got towed to Childress, TX. I found Danny this morning and he can fix it but needs to find the “T” at O’Reilly’s. He said the hose wouldn’t be available here but ya never know what God might have accidentally had sent this way. Anyway, he should be able to replace the “T” and fix it so we can make it to OKC!

To Danny’s complete surprise, O’Reilly’s just happened to have the hose that my SUV needed!  I was so thrilled and let him know that I wasn’t surprised at all because a group of us had specifically been praying over this situation and those prayers had been answered!

Pretty much everyone I ran into during the less than 24 hours we were in Childress, TX heard about how God was working things out. It was exciting and refreshing to share the details of how God was working with people I didn’t even know. Even a few people I hadn’t personally spoken to asked how the situation with my SUV was going and I got to share how amazingly God was working!

This situation could have gone very differently, if I had perceived it differently. It really made me stop and think.

How often do we allow our frustrations to overtake a situation and spew negativity instead of thankfulness?  Are we unable to share how our amazing Savior is working in our lives when all we can spread is the bad news of what’s happening? Yes, I know there are some situations where it may seem like God is absent, but He’s not. He’s there and He wants us to focus on Him instead of the “broken down” situation that we are living.

The Opportunity of Spreading the Good News

We are supposed to be good news bearers! We can’t spread the good news and spew negativity at the same time.

Sometimes we make sharing Jesus and our faith too hard. If we are willing to be transparent with people about our joys and struggles and where Jesus is in all of it, then they will see how real He is and start to understand that the christian walk is not fake or fluff. It’s real and it’s hard but we have an amazing Lord and Savior who carries us through it all!

We can look at the times of brokenness in our lives as opportunities to share our faith with others.

I encourage you to share with at least one other person today how God is working in your life. I’d love to hear it!

What a great story. Good for you for aligning yourself with God so well. I’ll have to use that same question when I am wondering how to get the conversation on Jesus.