Take a Tip from St. Nick 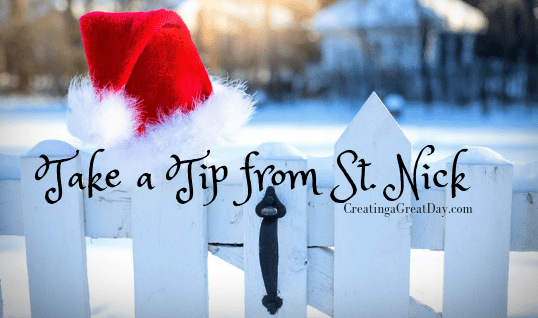 As the kid’s and I were listening to an audio book called The Autobiography of Santa, I couldn’t help but think about how we all need to take a tip from St. Nick.

Take a Tip from St. Nick

You see the orphan turned bishop, who eventually turned into a larger than life mythical, jolly, gift-giving legend, started out as an innocent young man simply trying to provide for others who were in need without embarrassing them. He would sneak in, gift items to children so the parents wouldn’t be ashamed.

His goal was to give anonymously!

He did it without fan fare and did not want to claim the recognition. It is this very act of going about giving gifts that we should take as a tip from St. Nick.

In a world where every act of kindness seems to be captured and posted on social media, it’s refreshing to take on the challenge of doing good and keeping it between us and God. His love compels us to love like he loves and to give all the glory to God instead of keeping it for ourselves.

“So when you give to the needy, do not announce it with trumpets, as the hypocrites do in the synagogues and on the streets, to be honored by others. Truly I tell you, they have received their reward in full.”

I had an amazing English teacher when I was in High School who challenged us to do good deeds and not tell anyone. I took this to heart and found that it’s like having a wonderful, uplifting experience with Jesus. It brings so much joy to give to others and since God knows all our actions, we can bask in the opportunity to share what he has shared with us with others and praise Him for letting us do it!

The Key to Giving Well

Obviously, St. Nick holds the monopoly on using chimneys. I don’t mind that much because I’m not one for small, sootty spaces. But there are plenty of ways that gifting to those in need can happen without much fan fair. One of the most important things to do when trying to meet the needs of others is listening to them.

Find out what they actually need and gift that specifically.

In this historical fiction book there is a dialog that happens between the young Nicholas and his priestly mentor, who encourages him to see the needs around him and problem solve how best to give.

Nicholas became frustrated after placing coins in a stocking so a young girl could purchase crutches, but instead the mother used the coins to purchase something for herself.  After ranting and raving about how evil the mother was, the priest simply asked:

Did you leave a note as to how to use the funds?

How were they supposed to know the money was for crutches?

Would the girl lean on the coins to go buy the crutches?

Understanding what the priest was saying, Nicholas later returned, after carving the girl a special set of crutches.

Setting Our Pride Aside When Giving

I’ve mentioned before how I have personally realized that sometimes I believe I know what someone needs better than they know their own needs. Well, I’ve been shamefully wrong before and Jesus’ example leads us to listen, provide physically, and explain how God provides spiritually.

So the key to giving well is to listen and pay attention to those in need around us.

The Gift of a Generous Spirit

If you want to get in the need seeking and gift giving mood as well as be entertained by how the adventures of Nicholas evolved into Santa Clause, then you would enjoy listening or reading The Autobiography of Santa Clause by Jeff Guinn.

It’s full of historical facts, figures, and in a beautifully entertaining way weaves in geography with the rise and fall of empires. It embarks the reader upon an adventure of understanding how December 25 became the day to celebrate as well as including other men to myth legends such as King Arthur and Attila the Hun.

Our family has had so much fun listening to it, especially since we’ve been studying many of the places and people that are mentioned.

The Gift We ALL Need

But of course the greatest gift giving book is the one that brings a joy-filled eternal life – The Bible. Through these pages and in every story, if we look close enough, we will see how God weaves his love throughout the generation to give us the best gift ever, his one and only son, who would choose to glorify God and sacrifice himself on the cross, so that we could be united in heaven with God eternally.

Jesus came into the world quietly, without a lot of fan fair. He found the ultimate way to meet our most glaring need, which was removing our sin, which broke our relationship with God. With a willing heart, Jesus did not hold any good thing back from us.

If you haven’t fully taken hold of this gift of grace that Jesus has extended to each one of us, then don’t wait any longer. Realize that his grace is for everyone and the greatest gift you could ever give to someone else is to share the story of God’s amazing grace with others.

Don’t selfishly hold it all to yourself. Don’t fear the reaction of what giving the truth of God’s grace to others might be, just give it freely. It’s THE best gift you could ever give because we all need it!

Nicholas understood this very well too and it was a gift he “fought” to gift as well. He willingly served time in prison when the Roman emperor Diocletian was persecuting Christians as well as at the Council of Nicaea.

So take this tip from St. Nick: Give anonymously to the needy and share the Gospel Truth with others!