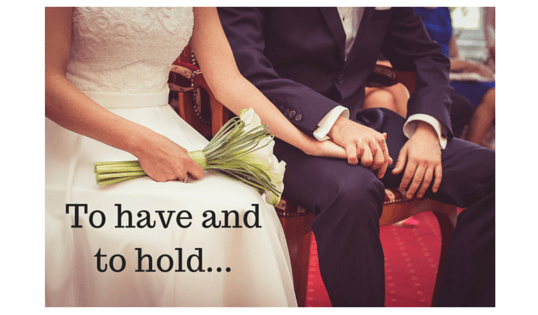 To Have and To Hold

25 YEARS!  That’s how long I’ve been married!  Today is our anniversary.  We’ve been through so much in the last twenty-five years and it has not always been easy. 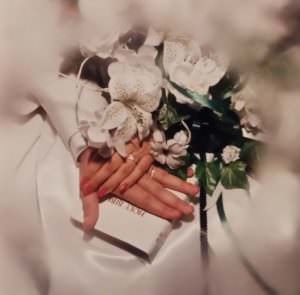 Our wedding vows were:

…To have and to hold from this day forward,

for better for worse,

for richer for poorer,

in sickness and in health,

to love and to cherish,

till death do us part.

To have and to hold from this day forward…  Well that about sums it up!  He’s stuck with me.  It has not always been easy and I know that there have been days that we both have wanted to just throw in the towel and give up.  It’s just been “too hard”.  But, we have worked through our problems and stayed together.  I know I am not the easiest person to live with but he has stuck by me all these years.  We dated for three years before we got married so he knew what he was getting into… mostly.

For better for worse…  We have had lots of both of these times.  The better was the birth of our three children.  The worse was years of infertility and the loss of our first pregnancy.  The better was new jobs, God’s Provisions for us, new opportunities, friends, more things than I can remember…Thankfully, there are so many more better than worse. We stayed together through all of these worse times and these times brought us closer together and closer to God.

For richer for poorer… We were poor when we got married.  My husband was unemployed but had the promise of a job within a month.  That job did not pan out but another did the following month.  It was a better job, financially.  We focused on our careers in the early years of our marriage and were financially sound.  We have had our financial ups and downs over the years but have always found that God will provide for our needs.  My husband always had faith that God would provide the job he needed when he needed it and this has happened on numerous occasions.

In sickness and in health…  That has been our biggest struggle.  Sickness means sickness in this marriage.  I battled infertility for three years.  I also had a terrible accident in which it took ten stitches to sew up the side of my face.  My husband had a medical condition that went undiagnosed/misdiagnosed for a year.  He ended up losing his job because of this illness.  After numerous doctors and specialists, he was finally correctly diagnosed and treated very easily.  He has also had kidney stones and he developed food allergies.  And now more recently, he had a heart attack last year just a week after our anniversary.  He should not have survived this heart attack.  I then had my own heart scare that turned out to be false positives (I believe this was due to the power of prayer. I had too many tests that showed problems for the angiogram to come back with nothing wrong.)  His heart attack affected us the most.  That made me realize just how much I love and need him and I could see how much he loved me because of how he fought to stay alive.  I also could see his love for me when I had my wreck and when I had my “heart problems”.

To love and to cherish…  We love each other, although there are probably times that we do not like each other.  He buys me the most heart touching cards that declare his love for me.  He knows that I think that cards are a waste of money but he still buys them to tell me how he feels.  (I think part of it is to see how much he can make me cry now, oh, in a good way, not bad.)  Even though I tell him to quit wasting money on cards, I do look forward to them.  I, hopefully, have shown my love for him through all that we have been through.  At least, I haven’t purposely fed him something that he is allergic to.  (It’s a joke in our house that I will feed him something and then collect the life insurance.)

We have been though a lifetime in the past twenty-five years.  God has been with us through it all, even when we were not walking with Him the way that we should.  I pray that God will give us at least twenty-five more.  Till death do us part.