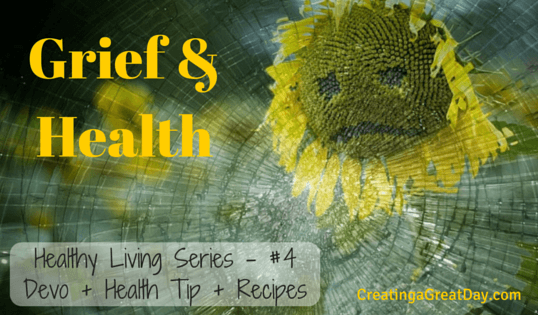 I thought I would take a break from my healthy living series today to talk about grief because I just learned of the passing of a great man.

Not only was he a friend of mine, but he was the grandfather of a friend of mine.  I’ve known him for about ten years and I think I bonded with his granddaughter because we are so much alike in that we had very close relationships with our grandfathers.  They were so close, just as I had been with mine.

I remember a few years back, I was working with my State Representative to pass a bill for farmer’s markets.  I needed people to attend a meeting at the State Capitol with some of the representatives.  He was the first to say yes even though he lived well over an hour away, and he called me several times to check on the progress and to offer help and advice.  This was a two year process and he checked on me during the entire process.  He would pick up things for me that I needed that were close to where he lived.

As I started writing this, God spoke to me and told me to stay with my series because grief affects our health.  So here is the fourth installment in my series.

I’m not a counselor but I have experienced deep grief and I know that it can affect one’s health.  I miscarried our first child (I wrote about it earlier) and have lost all of my grandparents, one of which for whom I was the primary caregiver.

I never really dealt with any of this grief until my grandfather passed away.  I didn’t realize I had been carrying around grief for all those years that I had just bottled up, AND it was affecting my health.  While my grandfather was going through the dying process (hospice term), it was difficult for me to admit that he was dying.  I did everything I could to keep him going because I wasn’t ready to let go.

During this time I started having medical problems.  My hormones were out of whack. My neck and shoulder hurt all the time. I lost and gained weight like I was on a roller coaster.

The day of my grandfather’s funeral, I almost passed out as I approached his casket.  I really do not remember that part but I do remember my husband and the funeral director’s wife sitting me down in the car.

I thought this was just part of MY aging process until I started going to a grief support group.  I realized that these health problems manifested themselves because I had bottled up my grief and refused to deal with it.

I had even pushed God away.  I was not angry with Him; I just thought I could do everything by myself.  I felt abandoned.  I still went to church and went through the motions.  I was what I always called a “pew warmer.”

Luckily for me, or should I say only through God, the support group facilitator was a very open, wonderful Christian woman.  (She is also the one that convinced me to write.) She helped me to see that I needed to turn to God and that He would help me through this. 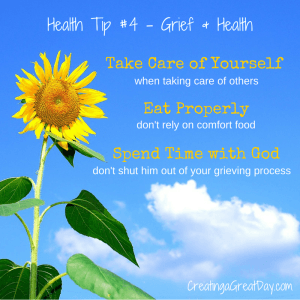 Take care of yourself.  Take time to pamper yourself, whether it be taking a hot bath, reading a book, watching a movie, whatever is your getaway.

Also, eat properly.  When we are upset, we tend to eat “comfort foods.”  These are generally high fat, high sugar foods that temporarily make us feel good.  Avoid those and try to eat something a little more healthy.

Most importantly, spend time with God.  Do not shut Him out.  It is only through Him that we can get through our grief.

Salt and pepper, to taste.

Cut garlic in half and rub over tortillas. This gives a great light garlic flavor.

Next smear avocado over tortillas.

Place other vegetables in a line down the middle and roll up.

Cut in half and enjoy.

This makes a quick light lunch or nutritious snack.

Have you ever tried to do it all by yourself?

Have you ever been physically ill from grief?