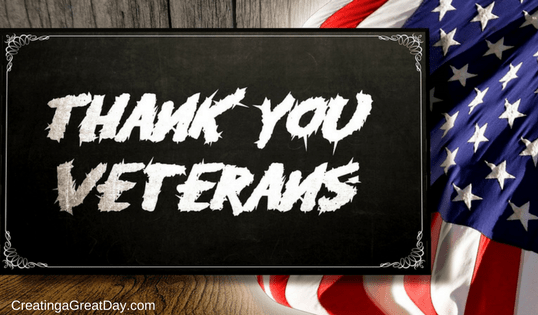 Thank You, Veterans, For Your Service

As I have gotten older, I have become more aware of true sacrifice.  Those who have served our nation have made a huge sacrifice that we do not stop to think about.  As Americans, we tend to think about the military in a more generalized way.  We know that we send these men and women to war, but it is in other countries.  We do not see the everyday results of this war.  Even from what we see on the news, we cannot fathom what war really entails because we have never lived it.  For us, war happens far, far away.

If Not for Veterans…

My perspective is much different.  (Even as I type this, I have tears in my eyes thinking about it.)   A few years ago, I started noticing some older men wearing caps with “Korean War Veteran” embroidered on them.  It dawned on me that if it were not for these men, I probably would not be here.  As I have written about before, my mother was a child in Korea during the Korean War.  She lived and survived that war.  She has seen firsthand what war looks like.  Had it not been for the intervention of the United States of America, she would not have been able to come to the United States.  She might not have even lived through the attempted communist takeover.  She would not have met my father and had me and my siblings.

Do we truly understand the sacrifice of these men and women?  When young men and women volunteer for our armed forces, we do not give it a second thought.  No one forced them to join–they VOLUNTEER.  We do not know how many lives they have saved or how they have affected countless lives.  We do not know all the good they have done.  Many times, they do not even realize the lives they have impacted.  Most never speak of it after they return home.  They sometimes come home wounded and traumatized.

These men left their homes and families to fight and possibly die for someone else, people they do not even know.  They had their reasons for joining the military and most were willing to make that sacrifice, if necessary.  Most did not truly know what lay ahead of them, the destruction and death of war.  Yet, they went and fought.

Take time to thank a veteran. 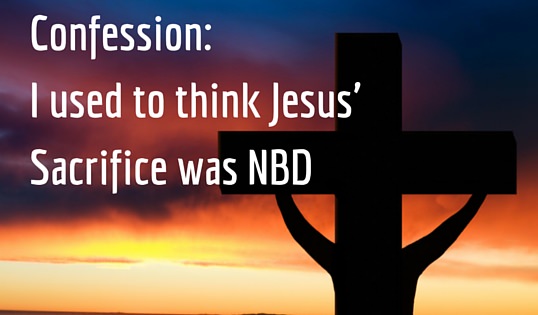 Confession: I used to think Jesus’ sacrifice was NBD

We are a week a few days away from Good Friday. The day we somberly, with thankfulness in our hearts, bow in awe of the love of God toward us. At least that is how I approach Good Friday now.

I have a confession to make to you: I used to think Jesus’ sacrifice on our behalf was NBD or No Big Deal.

I’m going to tell you what truths I was forgetting to make me that indifferent to what Jesus did for us on Good Friday. Then I’ll tell you what brought me out of my forgetfulness and how I react to Good Friday now.

Friends, I used to think about Jesus dying on the cross and be very thankful. But while I was thankful, I was not particularly impressed.

It seemed to me that sacrificing your life was kinda common. I remember reading stories of war heroes who valiantly gave their lives for their fellow soldiers and country and being so grateful. I remember hearing about how the Secret Service would jump in front of the President to save his life at the expense of theirs. As I got older, I would read about the courage of Christians who were killed for their faith. In all of these stories, I would think, “They did what Jesus did–sacrificed their life.”

And yes, it is true, they certainly did sacrifice their lives and I still am always moved and amazed at the courage of people when faced with incredible circumstances.

But I forgot one thing. Jesus was not just human.

It is true that Jesus was fully human, but he was also fully God. He is Emmanuel, God with us. This is the truth I was shamefully forgetting.

He is God and God allowed himself to be killed and tortured for us humans.

A few thoughts brought me back into remembrance of this fact. When thinking about this incredible, astonishing, shocking, humbling truth of Jesus’ sacrifice, I like to go back to where the sacrifice all began: Christmas.

(If you don’t know about why we needed Jesus to be the sacrificial lamb for you and me, click here to learn more. It’s crucial to your life. I guarantee it’s worth your time. And if you have questions, please feel free to comment below  or send your email to us via our contact page and I’d love to chat with you.)

At Christmas, Jesus left heaven to come to earth so that he could be the sacrificial lamb for us.

That right there alone is enough of a sacrifice! Friends, I can’t even leave my bed on a cold day! Think about the perfection of heaven and what comfy, cozy place Jesus left for us.

We all know life here on earth is no cakewalk. We all get sick and tired and cold and hungry and… Jesus got those things too. He didn’t in heaven. Plus, he was mocked, beaten, spat upon, and betrayed by his closest friends. Not a cakewalk for sure. This alone is a huge sacrifice. I now always think about this sacrifice at Christmas and this sacrifice alone now leaves me in awe.

Second, Jesus is God. We are human.

This seems obvious but for years it escaped me. I was knocked back into remembrance when my husband was talking about something he had heard someone say about humans, dirt, God, and how they all relate.

It starts with a question: Would you die for a pile of dirt?

Probably not. I’m wagering almost every person would say that would be so crazy! And they would be right. But that is exactly what God did.

Genesis 2:7 (NIV) says, “And the Lord God formed man out of the dust of the ground, and breathed into his nostrils the breath of life; and man became a living soul.”

Yep, we are dirt. From dirt we came and back to dirt our bodies will return when we die. The only thing that gives us any value is God himself because he breathed his life into us, gave us a soul that will live forever, and values us as cherished children.

…and yet he came down from comfy, cozy heaven for me and you to be tortured, betrayed, sick, and eventually killed.

On top of all of this, Jesus died for a pile of dirt that sins against him. For “all have turned away, they have together become worthless; there is no one who does good, not even one.” Romans 3:12 (NIV)

We have sinned against you Lord and yet you died for us.

Oh friends, how I have asked God for his forgiveness for my being so prideful and forgetful of his immense mercy, grace, and love toward us. Who can “grasp how wide and long and high and deep is the love of Christ?” Ephesians 3:18b (NIV)

I didn’t. And the truth is I still can’t.

Because I’m a human sinner I don’t think I can ever grasp how perfect and unselfish God’s love is toward us. I’m incapable for “who has known the mind of the Lord?” Romans 11:34 (NIV)

So for me, Good Friday now is a remembrance of who I am and who God is. This fact alone throws me into worship of him. Then, on top of that, to remember that he has died for us and that I know the depths of his love toward us is far greater than I can fathom–it’s overwhelming. I’m overwhelmed.

Have you ever felt this way?

Let me know in the comments. I’ll be glad to hear from you.