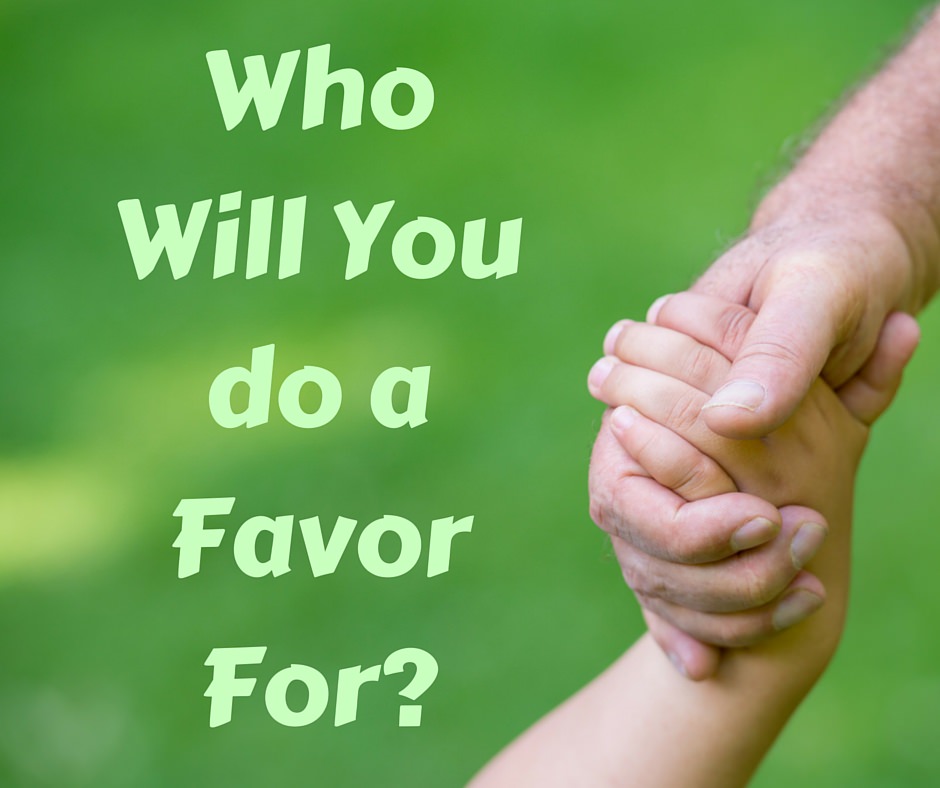 Who Will You do a Favor For?

Who are the people you will do a favor for?

I’m talking about any kind o 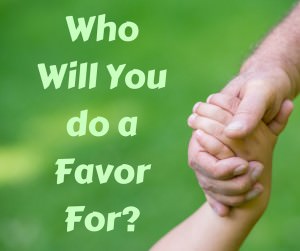 f
favor, big or small, but mostly I’m talking about the type of favor where you are slightly inconvenienced and it costs you something like your time, a little bit of money, giving up something you had planned, etc.

I have people in my life that, without question, I will do a favor for. Who are those people for you? Let’s take a minute together and really think about it. I’m going to list some people. As you read below consider answering each question in your head or out loud ‘yes’ or ‘no.’

Would you, without question, do something for your husband or wife?

How about something your children ask you to do?

Your neighbor who knocks on your door?

Your best friend who calls in the middle of the night?

What if an acquaintance who has a personality that grates against yours asks for something?

What about your pastor?

Would you automatically do something for God when He asks?

I’m not proud to say that I’ve been convicted of this lately. I think most of us Christians would say, “Yes! Absolutely! I will do any favor God asks of me,” but in reality my sin makes it a bit more muddled than that.

Before we get into this further, I’d like to confess that the title of this piece is not very good.  “Who Will You do a Favor For?” suggests that we do favors for God.

The truth is that God does not need us to help Him. In the book of Acts, it is written,

And he is not served by human hands, as if he needed anything. Rather, he himself gives everyone life and breath and everything else. (Acts 17:25 NIV, emphasis added)

So, I’m sorry for that bad title! But if God doesn’t need anything from us, why do you think God asks us to join Him in His work? Or to put it as I did above, why does He ask us for a favor? I’d like to suggest that it is for His glory and through His glory being made known, people are saved.

Let your light shine before others, that they may see your good deed and glorify your Father in heaven. (Matthew 5:16)

Carefully consider this: When we say ‘yes’ to doing a favor for God, people see it and take notice. And then if we point out, as we should, that we do these things because we are Christians, God is glorified and people are drawn to this God of ours that asks His people to love and serve with abandon. This is what Jesus did, right? He loved and served with abandon and because we are a people who bear His name as CHRISTians, we are called to do the same for His glory and so that men might be saved.

This is why we labor and strive, because we have put our hope in the living God, who is the Savior of all people, and especially of those who believe. (1 Timothy 4:10)

May all know that we are His disciples, when we love one another, and then may they be drawn to believe in the One who saves.

But what does God asking us for a “favor” look like? I think it can look so varied! God can be served in SO many ways that I often find myself surprised and inspired at the really neat ways Christians are “doing God a favor.”

To illustrate one way God asked me for a “favor,” I’ll share with you a recent favor fail of mine. One day our family received a letter from a ministry asking for a small amount of support. In the moment, I was struck with the thought that this letter is like God asking me for a “favor” by supporting His work through these people. Even with that knocking on the door of my heart, I still put it aside to do later. Not that long ago, I found it in a pile, still undone! I was ashamed that I found it too inconvenient to take a moment that day to grab the checkbook and a stamp and take five minutes or less to send off some support and encouragement.

This led to a convicting train of thought.

Follow along with me: It’s often said that if you ask a favor from someone in person, more people will say ‘yes’ than if you send a letter or email asking for help. Let’s bring that truth to what I did the day I got the letter.

If a neighbor had come and knocked on my door that same day and asked for a favor, face to face, I would have done it right then and there.

When I got the letter from the ministry, was not God with me? While I might not be seeing Him face to face when He asks, is He any less with me? I don’t think so. But for some reason, with my worldly thinking that God wasn’t here, even though He was knocking on the door of my heart and is always here, I told Him, “Not now, Lord…”

I shut the door in His face.

I’d never do that to a neighbor. Why do I do it to my Lord?

You may not get a knocking on your heart’s door about a letter, but I believe that God asks all of His children to serve in some way. What way is it with you?

Certainly if you feel your heart tugged at all, ask God right now, in this moment, to help you see ways He is asking you to serve. I know I’ve not recognized Him asking in the past, so I like to ask Him to help me see His asking better. It’s like the famous movie line, “Help me, help you!”

Ah friends, I’ve had so many favor fails. Some I’m aware of and 7,000 x 7,000 times more that I’m not aware of. While this truth saddens me, this truth also propels me to praise my Lord.

I praise Him because my salvation is not hinged on my “favors.” He is not tallying up my favor successes or favor fails and I’m so thankful.

He’s not tallying up yours either.

If you declare with your mouth, ‘Jesus is Lord,’ and believe in your heart that God raised him from the dead, you will be saved. (Romans 10:9)

Jesus paid it all.

He does it all.

And He loves and wants all of you.

Doesn’t that just make you want to do Him a favor?

Let me know in the comments what you think. Tell me about your favor successes, fails, or anywhere in between. I’m interested to hear!