My Kids, My Sword, and My Story

The Tale of the Brave Villager and his Sword

Once upon a time, there lived a brave young man. He lived in a kingdom ruled by a kind, wise, and loving king. For the most part, the people were happy and lived good lives except for one thing…there was a dragon!

The king’s heart grieved deeply for his people under the tyranny of the dragon. However, being a good king, he did not leave his people defenseless. He gave each of them a sword.

These swords were no ordinary swords; they had in them the power of the king: the ability to defeat the dragon.

He loved his sword, because he knew it was a present to him directly from the king. He cherished it and studied every move against the dragon he could find. His sword did not collect dust or become dull because he sharpened it daily.

The Dragon’s Terror and Destruction

One day, the dragon came roaring from his cave and sat on the roof of a villager whose sword was covered in dust. The dragon breathed fire on the home and the villagers inside ran to their neighbor’s house as theirs was destroyed.

The dragon moved to another house where the sword inside was only used occasionally for comfort. When the dragon breathed fire on their home, the villagers ran for their sword. But they did not know how to use it effectively against the dragon and so their home was also destroyed.

Finally, the dragon came to the home of the brave young man. The young man did not need to search for his sword because he carried it with him always. However, his fright at seeing the dragon made him forget all about the sword and his home began to burn.

But because the sword had the power of the king in it, the young man could, in a way, feel it tugging at his hand. Sensing this, he remembered his sword. Skillfully he unsheathed the sword, pointing it directly at the dragon on his roof.

The dragon, seeing the sword with the power of the king in it pointed directly at him, fled in terror and the young man’s house was saved.

The Moral of the Story

My oldest son, knowing by now that most of my stories have a moral, asked, “All right, Mom…so what’s that about?”

I told them the story describes me at different points in my Christian life.

They replied, “Yes, the Bible.”

I asked, “Do we have an enemy like the dragon in the story?” 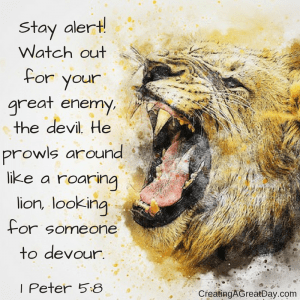 Do I Use My Sword?

In the past, I’ve been like the villagers whose swords became dusty. I rarely read my Bible. While I owned one, I didn’t see the point in reading it and I had some unsettling times because of it.

Sometimes, I confessed, I have been like the villagers who only occasionally used their sword. I have used the Bible only for comfort, reading a Psalm or two here or there. Or I have read my Bible because it was “the thing to do” in some circles and church and Bible study was merely a social event and what “should be done.”

Then I told them at some point, I became like the young man. I recognized the power God has put in His Word, the Bible, and I read it often. The more I read it, the more I came to love it and the more I wanted to memorize it so that I could always have it with me.

However, I again confessed that sometimes in the heat of the moment, when I struggle within myself or against the enemy, I forget about my sword and do not use it.  I told my children that I am asking God to help me learn in increasing ways to feel the tug of the Holy Spirit, reminding me to pull out my sword and point it directly at whatever situation I am in. (For another time I learned about using the Word from my son, read here.)

I then brought the lesson back to them and their bickering. I reminded them of the verse we had been “sharpening our swords” with by memorizing.

“Do nothing out of selfish ambition or vain conceit. Rather, in humility value others above yourselves, not looking to your own interests but each of you to the interests of the others.”

I asked them if any of them had used that verse to combat the bickering going on in the house. They got my point and half-smiled, half gave me the “good grief, mom” look I usually get with these stories.

Which villager are you in the story right now?

How is your life affected by which villager you are?