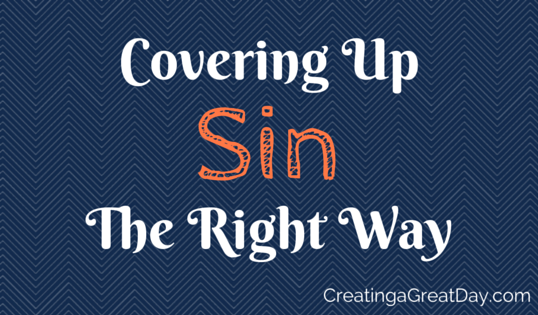 Covering Up Sin The Right Way

I am completely imperfect.  I want to be perfect and do what’s right every step of the way but the truth is that I am just a believer in Christ Jesus and realize that I am one of the greatest sinners.  The only perfection that can be found in my life is Christ’s perfection covering my imperfection.

We all like our good deeds to be shared but what about our mistakes?  Think about the worst mistake you ever made….how would you feel if it was now on the news and plastered all over social media?

There is an element to grace that Jesus shows COVERS UP sin, BUT it is not a “cover up” in that it hides away the sin.  Instead, it brings the wrong doing to the forefront of the person’s life who committed it and allows them to deal with it and come out of it without exposing it to everyone else.

James seems to be talking from his own experience here, when he encourages others to cover up sins just like his big brother Jesus did.  (Remember, James didn’t believe Jesus was the Messiah.  But once the truth was impossible to deny, instead of scolding James, Jesus loved him through his initial denial.  This is obvious because James then becomes his big brother’s biggest advocate and when disputes arise, James is one that helps resolve some of the issues.)

My brothers and sisters, if one of you should wander from the truth and someone should bring that person back, 20 remember this: Whoever turns a sinner from the error of their way will save them from death and cover over a multitude of sins.
James 5:19-20 (emphasis added)

An Example of Uncovering & Covering Sin

My children and I were reading the account of Noah the other day.  Something about his story struck me in a way that before it never had.  It’s easy to put Noah on a pedestal and think, man, he was such a righteous man because only he and his family were saved when God decided to clean the world up by literally drowningout all the wickedness on the Earth.  But just when I started to place him on the pedestal, God reminded me that none of us should be placed on a pedestal by showing us a sinful side of Noah and in the process showing us why covering each other’s sins isthe way to show love.

The sons of Noah who came out of the ark were Shem, Ham and Japheth. (Ham was the father of Canaan.) These were the three sons of Noah, and from them came the people who were scattered over the earth.

Noah, a man of the soil, proceeded to plant a vineyard. When he drank some of its wine, he became drunk and lay uncovered inside his tent. Ham, the father of Canaan, saw his father’s nakedness and told his two brothers outside. But Shem and Japheth took a garment and laid it across their shoulders; then they walked in backward andcovered their father’s nakedness. Their faces were turned the other way so that they would not see their father’s nakedness.

When Noah awoke from his wine and found out whathis youngest son had done to him, he said, “Cursed be Canaan! The lowest of slaves will he be to his brothers.” He also said, “Blessed be the LORD, the God of Shem! May Canaan be the slave of Shem. May God extend the territory of Japheth;may Japheth live in the tents of Shem, and may Canaan be his slave.” After the flood Noah lived 350 years.

Now, here is where the idea of covering up sin comes into play.  When Ham saw his father drunk, it’s like he instantly took a picture and plastered it all over Facebook, Twitter, and all the other media outlets.  It doesn’t seem at all like Ham was interested in actually helping his father through this time, which is what we should do when we catch a fellow brother or sister in sin, but instead he humiliates him.

His brothers choose a different path.  They walked in backwards and covered upNoah’s nakedness.  When I sin by doing something I know I should not be doing, I feel raw, and exposed because God knows exactly what I did.  It’s even worse if others catch me in that sin.  I think that Noah had to have woken up the next morning seeing he was covered with a blanket and realized that others knew about what had happened.

Whoever would foster love covers over an offense,
but whoever repeats the matter separates close friends.
Proverbs 17:9

It is easy to tell from the above situation who covered the offense and whorepeated the matter.  Do we find ourselves covering or repeating more often?

I can’t imagine having to deal with all that Noah had witnessed.  Yes, he and his family had been saved but he had also seen the rest of the world perish.  I would assume he was a bit traumatized.  And many who are traumatized try to numb themselves.  Maybe that’s why he did it. I have no clue.  Maybe he was celebrating being on land again and things just got a little out of hand.  Whatever happened that brought him to the point of losing control doesn’t matter.  What rings out loudly to me from this passage is that all of us mess up, but God can use the imperfect to carry out his perfect plan, and our job as fellow Christians is to cover up those who have sinned with grace.

So what does this look like in our situations?

1.  Jesus’ example of covering our sins is something that we, in this world of instant news/gossip news access, need to hold onto very closely.  It is so easy to click the share button after we have seen what someone else has done but is it the best choice?  Or to call up a friend and ask for advice on how to handle a situation.  I know I have been guilty of it myself and that is why now I choose to discuss it, because if I’ve done it then maybe someone else has too.  Laura wrote a wonderful post about “Respecting Your Husband on Social Media” that deals with this exact issue.

2.  When someone wrongs you, don’t spread it.  Share your hurts with the Lord.  Pray for your heart and theirs and ask God to help heal the situation.

3.  If you become aware of someone’s wrongs, either by seeing it personally or hearing about it, talk to the person about it.  And if someone else is talking about it, politely ask them not to.

As Christians, we believe we are people who have royally messed up and can never be nice enough to overcome any bad things we have done and welcome a savior to cover our sins with his perfection on the day of judgement, so that by his perfection we can draw near to God and be in heaven with him eternally.  When Jesus us called us to live like him, He expected us to be willing to cover others’ sins as well.

Are you ready to start covering instead of uncovering sins?