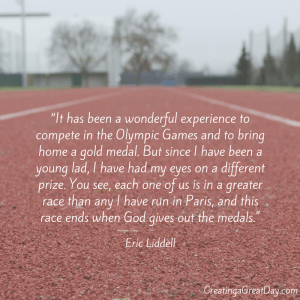 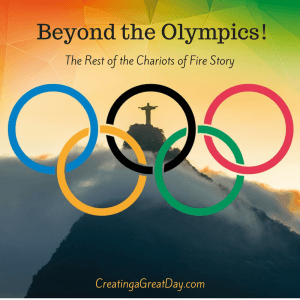 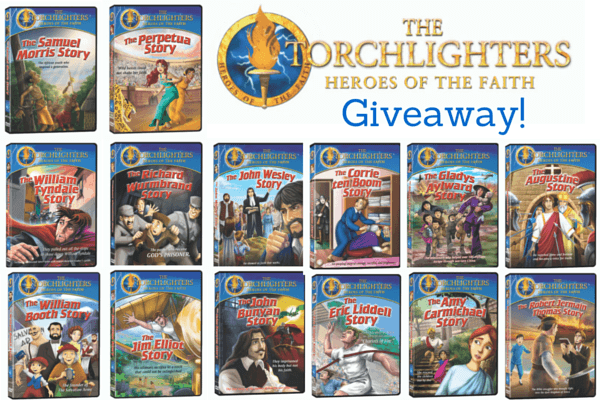 Last year, a friend introduced my family to the award-winng Torchlighters series and ever since then my family has been absolutely hooked!  This animated, biographical series highlights Christians a.k.a. Heroes of the Faith, who have stood up for their faith, have been tested, and have remained faithful!

And now I want to introduce it to you and give you a chance to win your own copy of one of these fabulous stories!

The creators of this series have found a way to bring the heart of the message to stand up for Christ whatever the cost and the biographical history home so that even the youngest viewers can watch and be encouraged but not frightened. I feel completely comfortable allowing my 2 year old and my tenderhearted 4 year old watch these encouraging movies.

Before watching this series, I only knew a handful of these names but didn’t know much of their stories.  Now, through this series we are being encouraged by brothers & sisters from the past who loved Christ too!

How many of these stories are you familiar with?

This is the newest Torchlighters’ DVD and I can’t wait to watch it.  From the online summary I’ve learned it is about a missionary in the mid nineteenth century, who risks his life to enter Korea and share the good news with a country that is doing everything to keep foreigners & Christianity out. 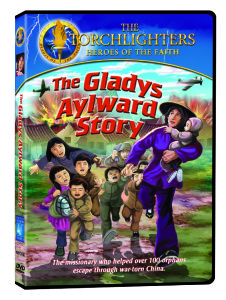 This is my tenderhearted 4 year old’s absolute favorite!  She loves to watch how God works through Gladys as she takes charge and cares for 100 children.  She loves how Gladys leans on Jesus and how we see God’s protective hand over them, guiding them on their long journey through extremely rough terrain while helping them avoiding the Japanese who are attacking China.  It’s just a small piece in this beautiful story but a very powerful one for children to see how having faith, courage and trusting God will make the impossible possible.

Be encouraged by The Gladys Aylward Story.

This is one of my 7 year old’s favorites.  Words are powerful and God has gifted each one of us with wonderful talents that he wants us to use for His glory.  Augustine starts out using his talents for his own glory and pleasure but through a series of events, his mothers’s prayers are answered when he comes to know Christ and then uses his gift of oration to take a stand for Christ. He goes from being the “voice of the emperor” and believing that only fools would believe in such superstitions to being a priest then later a bishop, an avid writer, defender of the faith and one of the most influential early church fathers. 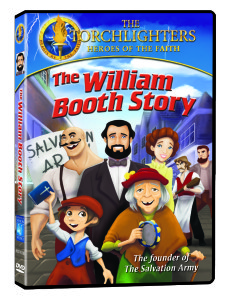 God truly loves every single soul, no matter how poor, how wretched or absolutely worthless the world seems to deem them to be.  William revitalized the people of the East End of London by bringing God’s love, hope and salvation to them. Although he was initially met with ridicule and violence, his persistence and determination started a revolution of souls and the Salvation Army was born from it.

This is the very first Torchlighter’s DVD 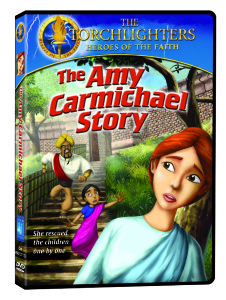 that we saw and we sat in rapt attention, learning about how Amy became the light to girls who were given to the Indian temple so that their impoverished families could be blessed by the gods.  It shares the story of the first of many souls, Preena, and the miraculous way God rescued her from the temple by bringing her to Amy’s safe care.  By bringing Preena to Amy, God brought Amy’s mission to light.  She began fighting for these children and saving them from their forced life of “marrying the gods.”

Check out the the Amy Carmichael Trailer.

There are many more awesome videos in this series and over the next few days, I will share those with you, so watch out for them.

Why I enjoy the Torchlighters series and highly recommend watching it with your kids:

1.  They brings up fabulous talking points.

2.  You will be encouraged right along with your children to be bolder in your faith.

3.  Tenderhearted children may need a hand to hold.

4.  These biographies are true to the faith story without having to go into all the graphic details.

5.  It allows us to talk about the ultimate sacrifice in a comfortable setting.

6.  Great for using in homeschooling or for a Bible class too.  Each DVD includes: