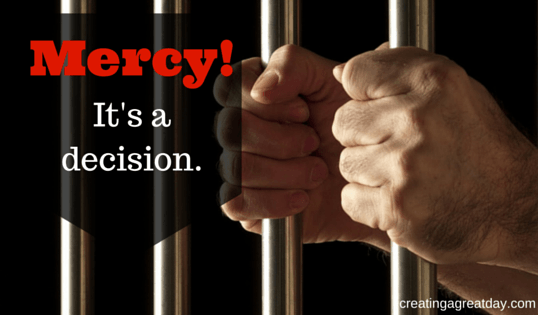 Let me start off by saying I am not normally a compassionate person. I see things in black and white; there are no gray areas.  I believe that criminals should pay to the fullest extent for their crimes.  I see stories on the news and don’t understand why they allow plea bargains. Throw the book at him.

I was recently the victim of a crime.  I do not want to get into the specifics and have changed some details to protect everyone’s identity.  I was some place and some young people were helping me unload.  I walked up and caught a young man going through my purse.  I was in such shock; I just stood there and watched him for about 30 seconds.  I finally asked him what he was doing.  His reply was, “I didn’t take anything.”  I then asked him why he was going through my purse.  He said, “I was going to bring it to you.”  I told him that he did not need to go through my purse to bring it to me.  He just kept telling me that he did not take anything.

Another young man that I knew came up right after and asked me what happened because he could see that I was upset.  He told me I needed to report it to a supervisor.  I asked what the perpetrator’s name was and he told me they would know.  (The perpetrator apparently had a history of issues.)  I was taken to the supervisor along with the young man.  She told me I could press charges and would give me his information to give to the police.  I was still in shock.  He admitted to going through my purse and insisted that he did not take anything.  I know nothing was taken because I was not carrying cash, but I definitely felt like my privacy was violated because I saw him going through my purse.  It is an indescribable feeling.

The supervisor asked me what I wanted to 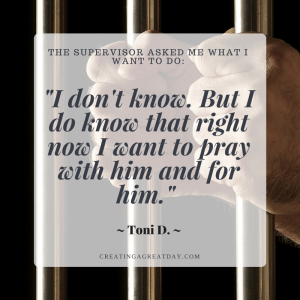 do.  At first, I wanted to call the police and have him arrested and sent to jail.  At that moment, God spoke to me!  I looked up at her and out of my mouth came, “I don’t know. But I do know that right now I want to pray with him and for him.”  There were four of us in the room, including the young man.  I think they were all shocked as I was.  We all stood up and joined hands as I prayed for him.  I asked God to bring him out of this path he was going down.  By the time I was done, we were all crying.  I hugged him and told him that if I pressed charges that it would be for his own good and not out of spite (this is so unlike me).

I thought about it the rest of the time that I was there.  He lost his position there and came up to me to apologize and ask me not to press charges.  I do not know if he was sincere but I decided not to press charges.  I told the supervisor of my decision and asked her to contact him and let him know what I had decided but that there was a stipulation: I wanted him to go to church.

Mercy:  noun.  1.  Compassion or forgiveness toward someone whom it is within one’s power to punish or harm.  Synonyms:  leniency, clemency, compassion, grace, pity, charity, forgiveness, forbearance, quarter, humanity.

I have thought about this so much lately.  I never show mercy but as we approach Christmas, I am reminded that God showed us MERCY!  He did not have to, but because He loved us He sent His one and only Son, so that we may be saved (John 3:16).  Had God not shown mercy and grace, we would all be trying to work our way to Heaven and still come up short.  “For all have sinned and come short of the glory of God.”  Romans 3:23 (NASB).  We do not deserve His mercy, but He gives it to us through His Son Jesus Christ.

This experience has not changed my view on criminals.  I still see black and white.  But, it has me rethinking how I interact with people.  I should be trying to make a difference and be more merciful.

Please join me as I continue to pray for him.

Have you ever shown mercy in a difficult situation?

Have you ever had anyone show mercy to you?