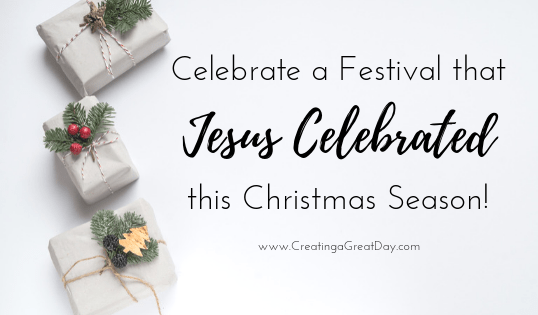 Celebrate a Festival that Jesus Celebrated this Christmas Season!

Never in my wildest dreams did I think our family would celebrate Hanukkah!  Would you?  I grew up enjoying everything Christmas and never gave Hanukkah a second thought.  It was a Jewish holiday and so it didn’t fit, or so I thought!

I’m actually really ashamed to admit that all I ever knew about Hanukkah was that it had to do with lighting candles, a weird top called a dreidel, and it was filled “eight crazy nights” according to Adam Sandler.  Yes, sad that most of my knowledge came from this song!

But what I found is that Hanukkah is really all about celebrating God’s miraculous ways and sharing it with each generation.

Then I learned that Jesus celebrated Hanukkah.

It was now winter, and Jesus was in Jerusalem at the time of Hanukkah, the Festival of Dedication.

What!?!  Did you know that?  I swear I’ve read that passage a million times and never realized Jesus was ever involved in Hanukkah, not until I learned another name for it was the Feast of Dedication or the Festival of Dedication.  It’s also known as the Festival of Lights, Chanukah, and Chanukiah.  It’s amazing once I started to learn about Jewish history and customs how the New Testament came alive even more, but that’s another post.

Once I learned these facts, my family and I couldn’t wait to celebrate Hanukkah.  We love celebrating our Lord and Savior and couldn’t believe that Jesus celebrated it too!

When we started celebrating Hanukkah, our children were 6, 5, 3, and just over 1.  I did not know what to expect from them but wanted them to be involved so we found a short book called The Story of Hanukkah to read about the history of what led up to the re-dedication of the temple and why it is celebrated. 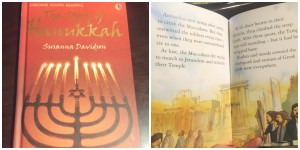 If you don’t have time to get this book, here are some great videos to show that give a good explanation.

A short 2-minute video about Hanukkah for kids.

A more detailed explanation from a Messianic Jewish perspective (Jews who believe Christ is Lord).

An old priest named Mattathias led the people in a revolt, which turned into a war.  Even when he died, his sons–especially one in particular named Judah–carried on the fight for religious freedom and miraculously thwarted the great Greek army.  Judah was nicknamed Maccabee, meaning hammer, and all those who fought with him were referred to as the Maccabees.

But that wasn’t the only miracle.  Once the Israelites won the battle against the Greeks, they returned and started to restore the temple.  They rededicated the temple to God and lit the Menorah. As commanded by Moses, once lit it was never supposed to be allowed to go out.  Normally, this wouldn’t be a problem, but it turned out they only had enough olive oil for one night and the process to make more would take at least eight days. Even though they only had enough oil for one night, God kept the Menorah lit those entire eight days and nights!  So every year since then, Jews have celebrated this miracle.

The symbolism to Christ in Hanukkah

The Servant Candle is the one that lights all the other candles.  This is the perfect parallel to Christ.  He is the light of the world and calls us to shine his light too!  We get our light from him!

When and How We Celebrate Hanukkah!

The Hanukkah celebration starts every year on the 25th of Kislev, which is a different time every year on our calendar.  In 2018, it begins on the evening of December 2nd and will end on the evening of December 10th.  Isn’t that exciting!  We can literally kickoff this Holiday season by celebrating a festival that Jesus, himself, celebrated!  I’m ecstatic!

This is how we added Hanukkah to our Christmas routine very simply. (Hint: It’s not overwhelming but one of the most peaceful things we have every done.) 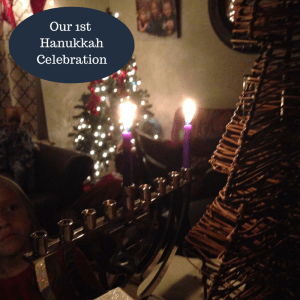 Every night around dusk, we would bring the kids into the living room by turning on this hilarious song called Candlelight by The Maccabeats.

After dancing and laughing to this song a few times, we would turn off the lights and light the servant candle.  Then depending on the day we would light the corresponding number of candles, letting the kids take turns lighting the candles.  (The first day, we lit one candle.  The second day, we lit two, and so on.)  As we lit the candles we recited the blessing then talked about how Jesus is the light of the world and we are called to be his lights too.

After lighting the candles, the first couple of nights we read through the book mentioned above, then prayed and sang some songs.

The following nights we asked the kids why we were celebrating Hanukkah and reviewed the story, then we would talk about some of our favorite miracles from the Bible and even the miracles our Lord has done in our own lives.  We usually spent about an hour together focusing this way on God’s goodness, singing, and worshiping together.

It was one of the most peaceful, relaxing, joyful times we have had during the Christmas season! This year, when I pulled out the menorah, our children asked if they could light the candles immediately! I was thrilled!

Over the years we added a few more fun things, but didn’t want to miss the focus.

For dinner together, we have tried some of the fried foods, which are the typical celebratory foods.  They eat a lot of foods fried in olive oil to commemorate how long the olive oil lasted. 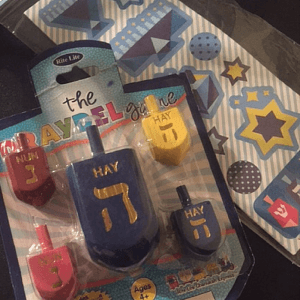 Here are a few recipes:

Latkes (fried hash brown pancakes) And just in case you need some inspiration in song form check out this video!

During our play time, we also play spin the dreidel.

We could add a lot of extras in there.  Pinterest is full of ideas, but truly, I loved how we focused on God’s miraculous ways. We didn’t get overwhelmed by adding one more thing to our already packed schedule.  Like I mentioned before, it was actually the perfect resting time…by celebrating Hanukkah we were resting and basking in God’s goodness.  What could be better than that during a season where we are wanting to focus all our attention on the miracle of Christ?

Have you celebrated Hanukkah?

What are some of your traditions? 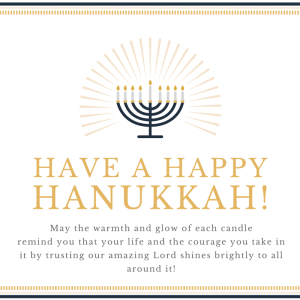