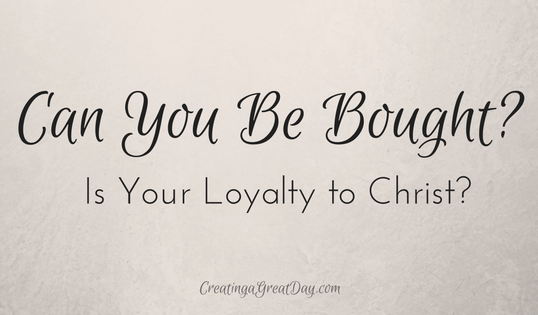 Can You Be Bought? Is Your Loyalty to Christ?

I have mentioned before that our son goes to the rival university of the rest of the family.  His loyalty is to Oklahoma State University (OSU) while his dad graduated from the University of Oklahoma (OU). This is a huge rivalry in Oklahoma as evidenced by what the football, basketball, baseball, etc. games are called: BEDLAM!

I was forced to convert to an OU sports fanatic while dating my husband.  We raised our children as OU fans, never thinking they would go anywhere other than OU.  You can imagine our disappointment when our oldest son decided to go to OSU.  I have even joked that we are failures as parents because of this.  My husband and his brothers all attended OU.  Sadly, none of their children have!  This makes for very interesting get-togethers and conversations.

Loyalty to His Team

Last year, Bedlam took place on the Saturday after Thanksgiving.  Our son has student tickets and so he needed to leave early to get back to college because of impending bad weather.  Since we were meeting him at my brother-in-law’s house, I brought him extra warm clothes, coats, and jackets since he had not packed much.  His uncle proceeded to get one of his old OU windsuits out for him to wear!  We all thought this was hysterical but my son was not amused.

His uncle decided that he would pay him to wear it.  We all decided to get in on the action.  Among all of us, we came up with $200.00 that we would pay him if he wore it and got on national TV.  I just knew he would do it, being a poor college kid.  He refused!  Because he is loyal to his school, he could not be bought!

Where is Our Loyalty? 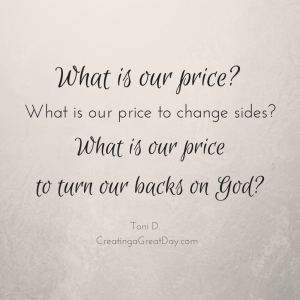 As Christians, we are to be “Christ-like.”  We are to show Him to the world through us.  I can honestly say that I do not always do this.  1 Corinthians 6:20 states, ” For you have been bought with a price: therefore glorify God in your body.”  Jesus paid the ultimate price for us.  He gave his life on the cross for our sins so that we may have eternal life.  He paid the price for us.  We should want to honor Him, live for Him, be loyal to Him.

What is your price?

Is your loyalty to Christ?

Can He be seen through you? 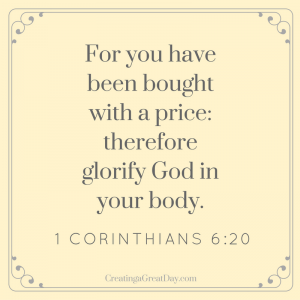