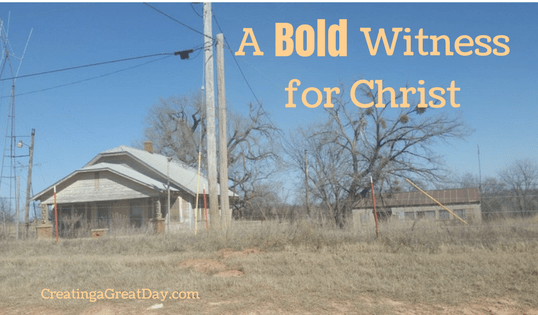 A Bold Witness for Christ

I recently was looking back through an “On This Day” post from Facebook and found a post I had completely forgotten about.  After reading it, I wondered if I had done what I was asking about.  Here is what I had posted:

“I witnessed something this morning that shocked me and brought a tear to my eye.  I took my son to an auction and when the auctioneer stood up to talk, he asked that we all bow our heads for a word of prayer.  He said a beautiful prayer.  My son and I looked at each other afterwards in shock.  My son commented that it was good to see someone do that.  That got me to thinking.  Do we stand before strangers and share our faith?  I know I don’t nearly enough.  Something to ponder…”

At least a hundred people were at this farm/estate auction out in the middle of nowhere.  And yet, this auctioneer had no problem standing up, saying a prayer over us, and glorifying God while doing his job.  His bold witness made an impression on both my son and me.

After re-reading this post, it made me wonder if that event had made a big enough impression on me to make me bolder in my witness.  For the last few days, I have wondered if it had changed me or if I went back to being meek.  I am still struggling with this debate as I type this.

I had actually forgotten about this occasion until I read about it two years later.  At first, I thought that I had not become bolder in my faith.  But after consideration, I think I have changed.  I may not have initially remembered this, but I have grown bolder over the last couple of years.  Now, I will pray with people I barely know if they need prayer.  The fear of rejection made me hesitant to ask someone if I could pray with/for them.  No one has said, “No.”  I have even made friends this way.

Since that day, I have also tried to be a more positive person and encourage people who appear to be having a bad day.  I have even stopped being rude to telemarketers!  After all, they are only doing their job.  (I am still not so nice to phone scammers.  That one is going to take some time.)  Some of these may seem like small things, but we never know what can come of it.

Are you bold in sharing your faith?