Do People Know You’re a Christian? 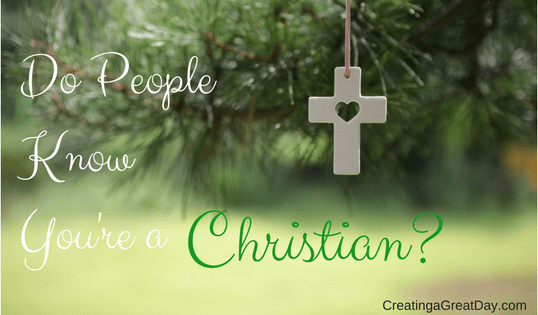 What kind of impression do you make on someone?  After meeting you, do people know you have a relationship with Jesus Christ?

Recently, I was selling at a farmer’s market when a lady approached our produce booth.  She began asking questions about our produce, but all of a sudden she stopped and said, “I know you.”  I told her I didn’t think so, but she insisted that she did.  She then said, “You’re a Christian.”  I told her that I was.  She then proceeded to tell me that she knew where I lived and that she had been to my house.  By then I was starting to really worry.  I asked her what her name was.  When she told me, I remembered that I had met her approximately eighteen years ago through mutual friends.  We discussed how we knew each other and had a great time catching up.

I will admit, as she told me that she knew me and where I lived, I got very nervous.  Imagine someone coming and telling you these things and much more.  I was beginning to wonder if this was some crazy person because she seemed to know too much about me.

As I thought back on our conversation, I had to laugh.  Then I recalled her comment, “You’re a Christian.”  We met eighteen years ago.  While I do not feel that I was a strong Christian at that time, apparently I made enough of an impression that she remembered that I was a Christian.  This makes me wonder if I make that impression on others.  Do people know I’m a Christian by the way I act? I know I do not always approach situations in the most Christian manner.

I keep remembering that saying that we may be the only “Christ” that some people see.  We must be aware of how we act and react to and around others.  I am not sure what I did all those years ago that made her realize I was a Christian.  I pray all who meet me see Christ in me and know that I’m a Christian!

What impression do you make?

Do other people know you are a Christian? 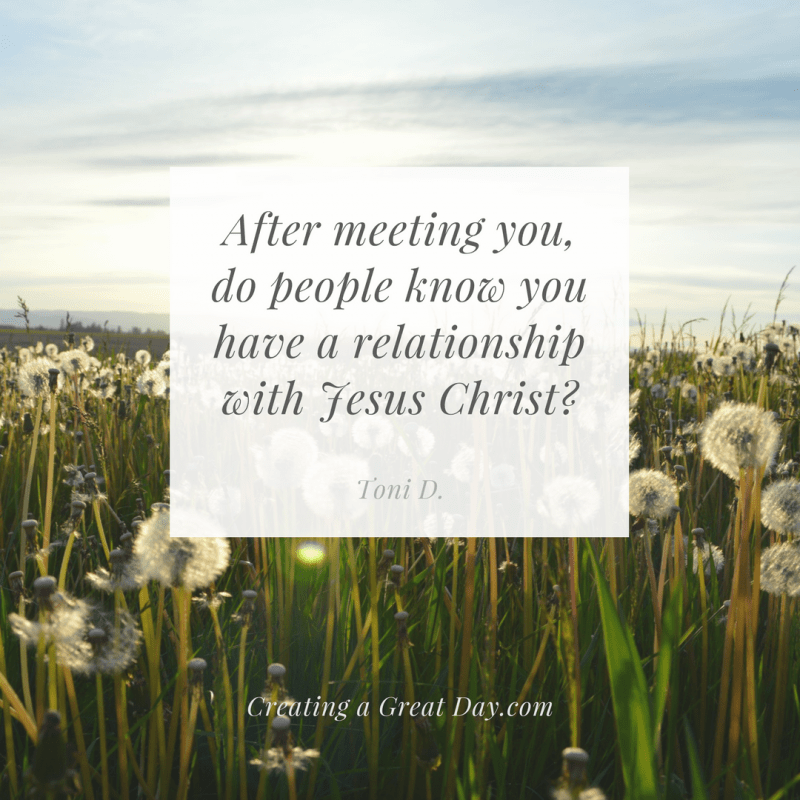 This is really relevant to me personally, because I’ve been thinking often about whether or not I really make the right impression on people consistently.

I know! It’s been a struggle for me. I must have made a better impression back then than I do now. God has really been convicting me of this, too.

Definitely something to be conscious of! A blessing that she had that impression of you!

Yes, it surprised me that that was what she remembered. It made me even more aware of my actions.

I often wonder if people recognize Christ in me. I try very hard to make sure I portray a christ-like attitude most of the time, but sometimes I fail. I love that she remembered that you were a Christian and it certainly made an impression on her.

It’s so difficult. I was surprised that that was the impression I left. We must about showing Christ through us.

I was surprised that that was the impression I left. We must remember to pray that we show Christ through us.

Toni, I’m glad to be reminded of how important our walk with Christ is to the world around us. We can get caught up in life, and completely forget that we are supposed to be representatives of Christ wherever we are and with whomever we interact with. – Amy
http://stylingrannymama.com/

Yes, I don’t always remember that my actions should reflect Christ. This incident really spoke to me.

I always make it clear in a subtle way. I must say my next-door neighbor was quite disappointed to learn of it.

It’s sad that your neighbor felt that way.

Dear Lord, we ask that You touch the heart of Alice’s neighbor. Bring them to know You. Let her be a good example. In Jesus Name I pray, Amen.

“Even on our worst day, we may be someone’s best hope”
I always think this when I meet people. Thank you for the article. Gave me some great inspiration for this weeks sermon. God’s blessings to you!