Does It Matter? Making a Difference

A Chance to Show Mercy

About a year ago, I wrote a post on mercy based on something that happened in my life.  How I handled the situation was so unlike me.  A young man had attempted to steal from me.  Instead of pressing charges, I prayed with him and asked that he attend church.  I hugged him, and that was the last time I saw him.  Since then, my heart has been heavy for him, and I have continued to pray for him.

I just learned that he died in a car wreck.  While I do not know the status of his relationship with God, I heard that he had received drug counseling and had cleaned up.  He was trying to get back into school and was getting his life back together.  He apparently had encountered other Christian influences that had helped him through his journey.  Hopefully, through all this, he came to know Christ.

I ask, “Does it matter?” because I often wonder if what I do matters.  Sometimes we go through our days seemingly on autopilot.  We don’t take time for others or see how our actions affect others.  We get so caught up in our own busyness.  How does what we do affect others?  We do not think about it.  We seem to just live our lives in our own little world, oblivious to others.

What if we all took the time to notice someone, pay a compliment, pray with someone, make a phone call, or even send a note by (gasp) snail mail?  These small gestures may seem insignificant to you but could change someone else’s entire outlook.  Instead of reacting in anger, say a kind word.  We do not know what others are going through.  Other people have things going on in their lives, too. 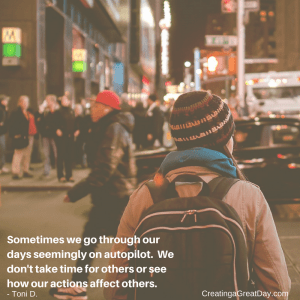 In my situation, I received an email from a lady who was involved in the resolution of the issue at the time.  She told me that my “wonderful display of Christian forgiveness was a part of his changing his life.”  At the time of the incident, I did not know if what I did or said made a difference.  I knew he needed help and that was my prayer and hope for this young man, that he change his ways and seek God.

This situation has affected me more than I could have ever imagined.  My heart has been so burdened by this tragic event.  This young man, who had gotten clean and was turning his life around, was taken so early in his life.  I have dwelt on this and wonder about the small part I played in this young man’s life.  Did I do enough?  Did my actions matter?

At the time the original incident occurred, I did not know if my actions made a difference.  I was obedient to what God told me.  Sometimes obedience is difficult, but as God has shown me through this, it does matter.

Is there a situation you wish you could go back and handle differently?

Have you seen the difference something you have done has made to someone else? 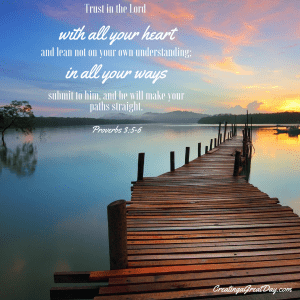 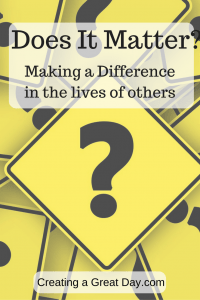