Looking to Him in Our Shame

David is known as a man after God’s own heart, but if you study his life, it won’t take you long to realize that he wasn’t without blemish. While known for his courage, he also faced moments of fear. One of these times is recorded in 1 Samuel chapter 21.

“That day David fled from Saul and went to Achish, king of Gath. But the servants of Achish said to him, “Isn’t this David, king of the land? Isn’t he the one they sing about in their dances: ” ‘Saul has slain his thousands, and David his tens of thousands’?”

David took these words to heart and was very much afraid of Achish king of Gath. So he pretended to be insane in their presence; and while he was in their hands he acted like a madman, making marks on the doors of the gate and letting saliva run down his beard.”

I’m a little taken when I read that David was afraid. Is this the same man who so confidently defeated Goliath? I can only imagine the embarrassment our strong and confident David felt after giving such a display. The Bible doesn’t really tell us that David felt shame over his actions. I have to wonder though, how would he have handled the situation if instead of fear, he’d felt as confident in the Lord as he did when the giant came down?

When the king saw his unsound state, he insisted that David leave. David fled to a cave. It is believed by scholars that at this time David wrote Psalm 34.

“I sought the Lord, and he answered me; he delivered me from all my fears. Those who look to him are radiant; their faces are never covered with shame.”
Psalm 34:4-5

Their faces are never covered in shame. 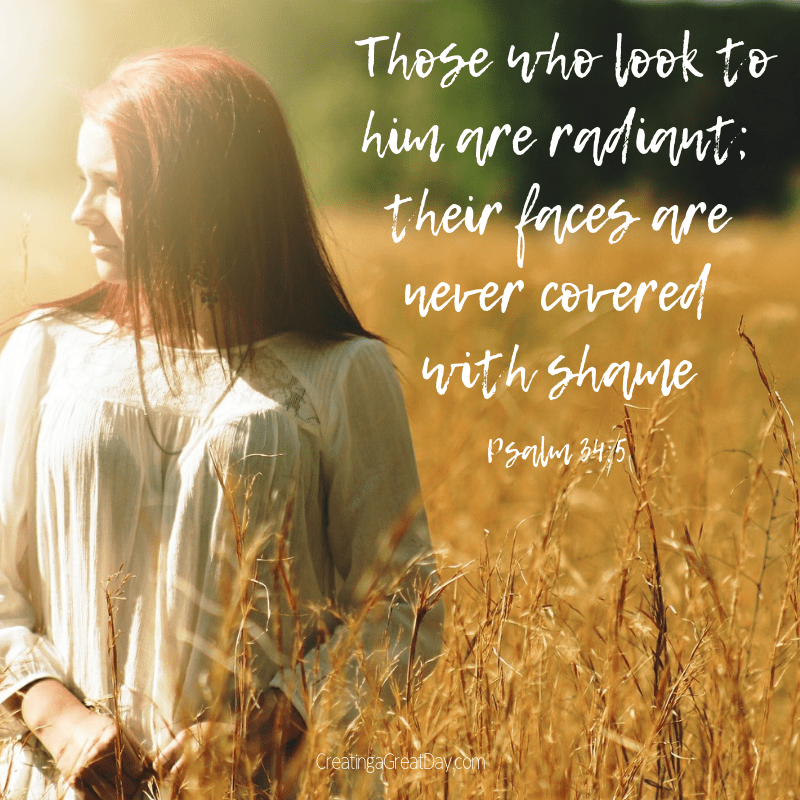 I wonder if David felt shame while drooling and scratching at the door. I wonder if he was looking back at his past actions and wishing he’d looked to the Lord in his fear. Be my thoughts inline with David’s thought process or not, I find comfort and direction in his psalm.

I so often feel ashamed with myself.

Ashamed for comments said or judgements made.

Ashamed for my idleness.

Ashamed for my shortcomings.

I believe that David forgot who he was when he was faced with this fear. He forgot that God had chosen him to be king, that the battle was the Lord’s. But as he later says, those who look to him are radiant and their faces aren’t covered in shame!

Oh how, I love David’s declaration!

In Romans 8:1-2 Paul tells us, “Therefore, there is now no condemnation for those who are in Christ Jesus, because through Christ Jesus the law of the Spirit of life set me free from the law of sin and death.”

When I look inwardly it’s no wonder that I feel insecure. When I focus on God, and what He’s done for me I don’t have to feel ashamed. I can move on and be empowered to take advantage of the opportunities He gives.

We must remember to look to Him and see that we’ve been forgiven, and that our flesh might be weak, but the spirit is powerful!

David was able to move on from his lowly encounter. He gave praise to God for delivering him and continued to seek God’s will. Yes, he would stumble, but David was a man of worship. He continued to look to God and seek His will. Oh, that we might do the same!

A Prayer Over Our Hearts

We praise you for the mighty God that you are, and for delivering us from sin! In all circumstances, may we look to you. Draw us to your presence and help us to remember who we are in you. May our lives not be liven selfishly, but instead for your glory. Use us to advance your kingdom!

In the Name of Jesus,

Kristin J
I am a girl who loves to sit with a cup of coffee and daydream. I am most passionate about Jesus, my family, and family ministry. My husband and I live in Oklahoma with our two precious daughters. I spend my days with my girls, discovering and growing alongside them! You can usually find us either in our sunroom, the park, or taking long walks through Target. 🙂