Learning to Relinquish Control to God

I will admit that I am a control freak.  If something needs to be done, I will do it, because of course no one else can do it like I can.  This has led to many interesting scenarios in my life. Even now, I struggle to relinquish control.

I have written in the past about my weight struggles and self-image.  As a teen, I battled anorexia.  Now, as a middle-aged adult, I struggle with weight gain.

Recently, a friend wanted to do a detox/weight loss plan on a group on Facebook.  I figured, “Why not?” This would give me accountability and I could lose a few pounds.  Most of my clothes do not fit anymore so I needed to do something.

The first morning I got on the scale–something I had not done in several months.  I almost cried.  Including one of my three pregnancies, I had never weighed this much before.  I knew I had to do this.  Studying the food list carefully, I started planning out what I would eat.  I was hyper-vigilant. 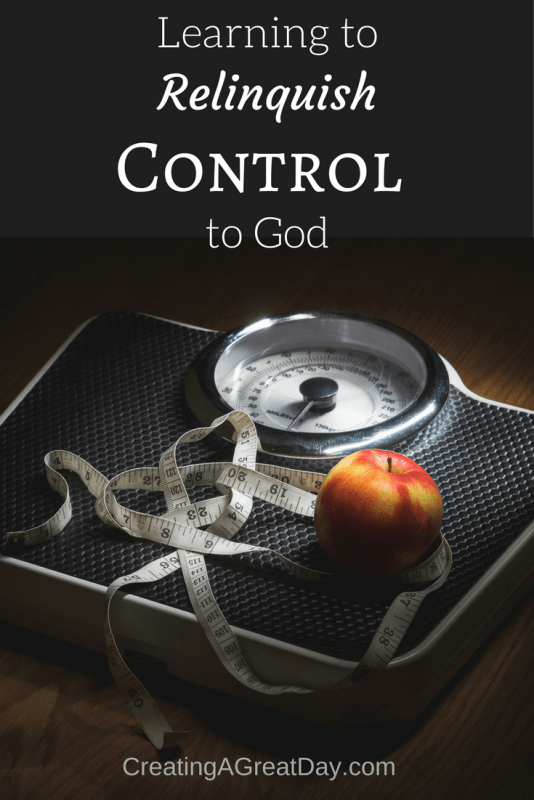 Determined to eat only what was listed and keep my calories low, very low, I lost eight pounds in the first week!  I was so excited.  Clothes were already fitting better and I felt good.  But, in the back of my mind I had a nagging feeling.

Halfway through the plan, I had only lost an additional pound in three days.  I was devastated!  The first eight pounds came off so easily. Now, I felt stuck, with basically no further weight loss.  I had foregone brownies, cobbler, cake, pasta, hamburgers–you know, all the “good stuff.”

Who is in Control?

I was having a pity party for myself when God told me that I was not in control. He was.  You see, my weight issues are about control.  When things seem out of control for me, I try to find something I can control and this time it was food.  I was controlling every bite I took.  Despite hearing God tell me this, my lack of progress still upset me.  As I dressed for the day, I found a pair of shorts I have not been able to wear in over a year.  When I put them on, they fit!

He showed me that it was okay that I had not lost more weight.  I was doing good and feeling better.  I did end up losing twelve pounds of fat in twenty-one days.  The detox helped me to get back to eating right and God showed me that He was in control.

Are you a “control freak?”

Have you learned to relinquish control to God?

Control, food issues, and emotional eating are all areas that I know well! It is an area that creeps back in over and over if I am not diligent in going to God and relinquishing control to Him. When I am not caring for myself in a healthy and loving manner my old patterns pop-up. It is a continue process! God bless!

Yes, as with all sin, we must battle it daily. Staying in the Word and in God is the answer!

“I was having a pity party for myself when God told me that I was not in control. He was” This happens to me so often! I’m also on a journey… not necessarily for weight loss, but for a more healthy diet! At the beginning I was having a pitty party, as I cut out my favorite snack: crisps! But God gently reminded me… “I created you, you are to take care of this body like you take care of a beautiful castle. I have instilled the strength you need to make you succeed at my commands!”

Yes, I had not been eating as healthy either.

Or do you not know that your body is a temple of the Holy Spirit who is in you, whom you have from God, and that you are not your own? For you have been bought with a price: therefore glorify God in your body.
1 Corinthians 6:19‭-‬20 NASB

You hit the nail on the head with this one! I can relate in so many ways to your post. I too have had several issues with control and God has spoken so clearly to me about just resting in his arms. I can not control situations around me and there have been so many times that I have been worn down by this weight on my shoulders. I just a few months ago actually received prayer for this. I needed to break away from trying to control everything. Great post!

Thank you. He does speak to us very clearly if we listen. I think as women especially, we feel like we have to be on control. We are not, God is!

Even in the smallest things, we have to learn to let go – like me schlepping my small bag around church all the time 🙂

Yes, everything! But now you have my curiosity piqued. I must see a picture of this bag that you schlep around.

You are so right, Toni. We want to be in control and the reality is, we aren’t. If we would just listen to His voice when he tells us not to dip our hand back into that potato chip bag, or yell at our kids or cut that person off in traffic, we would quickly realize He has it all figured out. Thanks for sharing a struggle that many of us are dealing with. – Amy
http://stylingrannymama.com/

Yes, we are not in control.

Did you have to mention traffic? Lol. Maybe that should be my next post…

It’s easy to remember God in the big, life changing issues of our life. But we tend to forget that He wants us to surrender EVERY part of ourselves to Him, even our weight issues. You’re right we need to release control to God, whether it be controlling our weight, controlling our speech or controlling our own paths.

You’re right, there is so much in our lives which is ‘secretly’ about control… thanks for the reminder!

I’m learning a lot about letting God control the situation rather than trying to manipulate things. By the way, you gain weight in muscle mass sometimes, even though you are getting skinnier. It just doesn’t show up on the scale, but you can fit into your clothes better!

Yes, muscle is why I will never weigh what I did in college. Lol.

Toni, I am sure a lot of us can identify with you here. Definitely try to control things – especially what I eat. But I can also eat for comfort too. I want God to be in charge. Congrats on your weight loss!

God should be our Comforter.

Wow- this is such good truth, but really hard to walk out! Only in His strength, huh. 🙂

Yes, He is our strength.

Another control freak here, and I’ve written about it a few times;)
A few years ago, God took control away from me. I think I’ve learned my lesson!

Sometimes God has to “hit us over the head” to get us to listen. I have had that happen, too.

This is an awesome post and a great reminder! I need to learn to relinquish control as well in many areas of my life. It makes me think of that song by Natalie Grant when she sings, “When did I forget that you’ve always been the King of the world?” Thank you for this reminder!

Yes, control is control. We must relinquish everything to Him.