Keeping Anger from Exploding into Sin 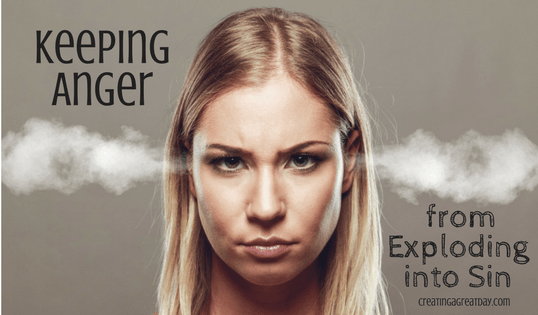 Anger unchecked is explosive. It can leave physical, emotional, and spiritual wounds. Learning how to keep anger from exploding into sin is a must in this society. We must not only teach ourselves but our children what to do when anger arises. 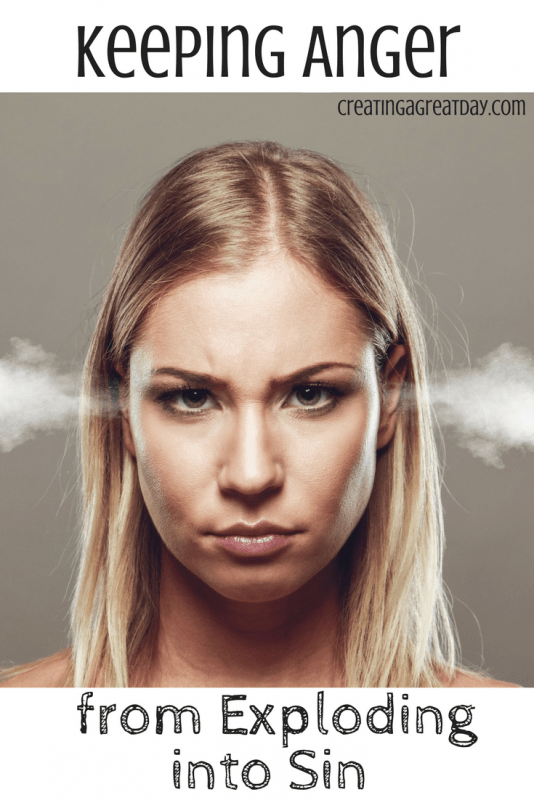 Watching the news makes it pretty obvious that we as a society are not doing a good job. Instead of encouraging others to not let their anger spew, it has become acceptable and encouraged. Then people wonder why it seems like every other day violent outbursts are literally killing others.

Being Cautious with Anger

Anger is a tricky thing because it is not a sin to be angry but if we do not deal with it then we can sin in our anger.

We have a set of questions that gets repeated often with a houseful of strong headed kids. These typically get asked when someone becomes angry:

It is ok if a situation brings feelings of anger, but it’s how we choose to handle that anger that determines whether or not we sin in our anger. So how do we keep anger from exploding into sin?

The other night one of our precious children’s anger erupted into a sinful flow of burning lava. The child at first tried to control it, but then gave completely into it. The child’s demeanor changed and the anger that was boiling inside his heart was so evidently displayed on the face and spewed out through his actions.

It was obvious that our son was struggling. Wanting to lash out was the last thing he wanted to do but he couldn’t figure out how to keep his anger in check.

Keeping Anger from Exploding into Sin

After cooling down a bit, my precious son walked up to me with a Bible in hand, asking for Bible stories about anger. Knowing full well what this child needed to hear, God put a passage on my heart and his. It was amazing how they complimented each other and taught the lesson he needed to hear.

Holding onto to our anger

Because the anger our son had was geared toward another sibling, I chose for us to read Genesis 4, which is the story of when Cain killed his own brother Able.

After reading that passage, I pulled our son in close and we started to compare his situation to Cain’s.

Me: Did you notice the description of Cain’s face? It was “downcast.”  Do you know how your face looks right now?

Looking into a mirror, he was quickly able to see what a downcast face looks like. His demeanor changed a little upon seeing the anger written upon his face.

Then we refocused on verses 6-7:

Then the Lord said to Cain, “Why are you angry? Why is your face downcast?  If you do what is right, will you not be accepted? But if you do not do what is right, sin is crouching at your door; it desires to have you, but you must rule over it.

God came to Cain. He asked him why he was angry and warned him not to let sin overtake him. But Cain chose to allow anger to rule his heart instead of leaning in and giving it to God. The result was horrific. He allowed anger to not only rule that moment but his life. He killed his own brother.

In turning back to our son, I asked, “Are you willing to hold onto your justified anger and let it stew in your heart against your brother? God doesn’t recommend it and doesn’t want you to sin by holding on to it. Do you know 1 John  says hating your brother is like murdering him? Do you really want to murder him?

Anyone who hates a brother or sister is a murderer, and you know that no murderer has eternal life residing in him.
1 John 3:15

Giving our Anger to God

The passage my son asked to read could not have been more perfect for this situation. I was amazed that he even remembered it. We’ve only read the story once while reading through the Chronological Bible, but it obviously made an impact with him. He wanted to read the Number 16, which is the story of Korah leading a rebellion against Moses.

His specific request was, “Mom, can we read the story about when the earth opened up and swallowed those people?” So I’m not sure if in that moment he was hoping for some justification as to why his annoying little sibling should be swallowed up whole or if he remembered how Moses handled his anger. Either way, God was about to use this story to remind both of us of a valuable lesson.

This was the perfect passage because like my son Moses had a reason to be angry, but Moses chose to handle his anger in a completely different way than Cain did.

Then Moses became very angry and said to the Lord, “Do not accept their offering. I have not taken so much as a donkey from them, nor have I wronged any of them.”
Numbers 16:15

Do you see the difference? Moses went straight to God with his anger!  This is exactly what we need to do. When anger balls up in us and we want to lash out, take it to God instead of taking it out on others. Allow God to deal with those who hurt you. Let him dispense justice, but even more pray for them that the person’s heart and attitude will be changed.

And boy did God avenge Moses!

As soon as [Moses] finished saying all this, the ground under them split apart  and the earth opened its mouth and swallowed them and their households, and all those associated with Korah, together with their possessions…And fire came out from the Lord and consumed the 250 men who were offering the incense.
Numbers 16:31,21,35

Anger much like fire is all consuming. It destroys what holds it as well as everything around it if it is not properly cared for, so when anger flares up in our lives, we need to be like Moses. Stop, drop, & pray!

So that’s exactly what we did. We took the time out to pray and ask God to calm his spirit as well as find better ways of dealing with his siblings.

I don’t want to raise Cains that think it’s ok to let the sin of anger overtake them and unleash their wrath on the world. So we will continue to keep anger from exploding into sin and pray our children will encourage others to do the same as well.

These are such great points. And it’s so important to remember that anger is not a primary emotion. It’s a reaction to an underlying more vulnerable emotion – sadness, worry, and/or embarrassment. Helping our children (and us) be more willing to understand and acknowledge our vulnerable emotion helps it not get to anger in the first place.

I love how you took the time to go straight to the Word with your son – what a teachable moment! It can be hard as moms to watch and not give in to frustration, but use each sin in our kids to point back to our need for Jesus. Way to train him in God’s Word which never is void!

I had a temper and anger as a child, but I’ve prayed for help with it. When I get irritable, I ask God to help me manage my emotions! God helps!