From Pain to Wisdom to Hope 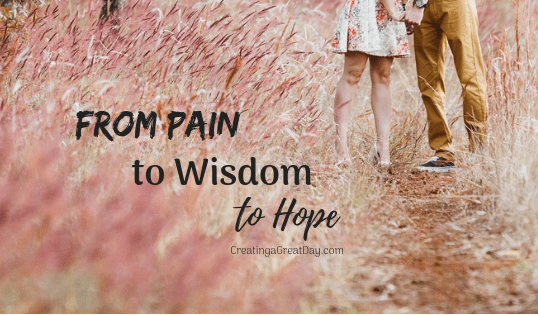 From Pain to Wisdom to Hope

We also glory in tribulations, knowing that tribulation produces perseverance; and perseverance, character; and character, hope.  Now hope does not disappoint, because the love of God has been poured out in our hearts by the Holy Spirit who was given to us.

Pain is the high price of wisdom, but even after purchase, we can accidentally leave it on the shelf.  Sometimes pain is paid in installments that seem to stretch endlessly at regular intervals over decades, with no maturity date.  At some point, though, we may return to the point of sale to redeem what has been bought, but with additional interest, paid in sorrow.

My parents have been married a full fifty-five years, and from the beginning my mom always described her relationship with my dad as fitting together like a hand in glove.  Well, that’s not the type of relationship I have.  While my husband asked for my hand in marriage—that’s as far as that metaphor goes.  A culinary metaphor is more apt—like oil and vinegar, tangy and sharp, coming together temporarily for a splash of interesting and complex flavors, but soon separating into entities that will never mix.

Opposites attract, as the saying goes.  Opposites may indeed attract, but it is no sure sign of compatibility, and when two such people come together in marriage, it may be a covenant of pain.  Sometimes there is a vain comfort in feeling one’s sorrows are uncommon and unique, such as the tortured artist cutting off his ear, but leaving a legacy of genius.  I have been tempted to think the obstacles in our marriage are more formidable than that which is common to man, and I am not ready to give up that idea completely.

What is in the guise of unique, formidable obstacles, though, is actually an age-old Ephesians 5 problem.

Men want to be respected.  Women want to be loved.  We are no different here.  What makes our marriage one of perpetual, irresolvable conflict is the basis of our decision making.

After twenty-three years, we find ourselves at an increasingly pressurized impasse.  The path of peace for one is a trampling and violation of the other.  In other words, the decisions which make my husband feel respected come at the cost of my feeling unloved.  Conversely, the decisions which make me feel loved come at the cost of my husband feeling disrespected. 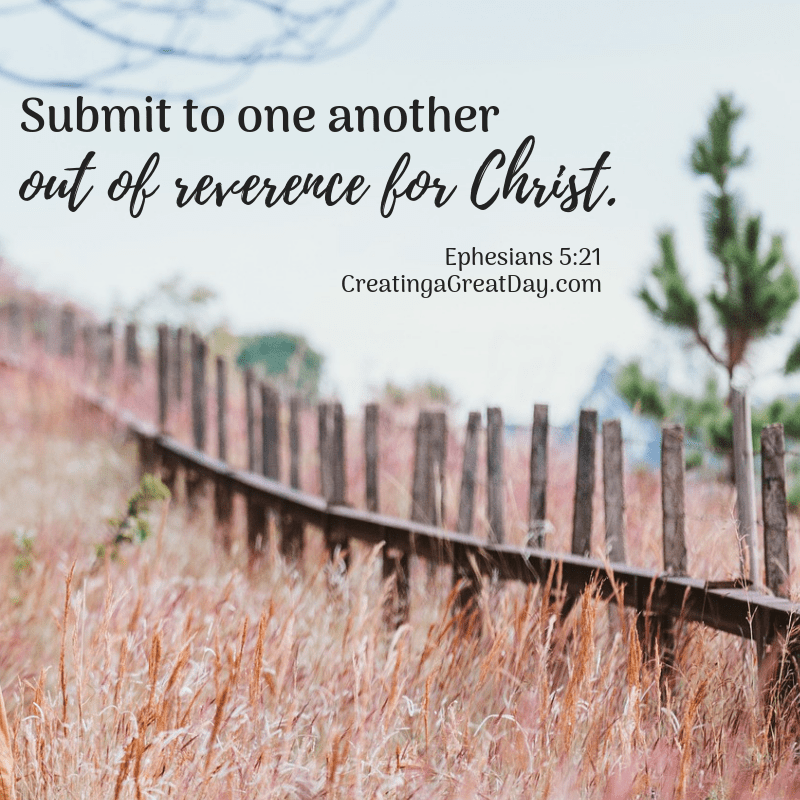 Can a wife solve her Ephesians 5 problem with 1 Peter 3?

Wives, in the same way submit yourselves to your own husbands so that, if any of them do not believe the word, they may be won over without words by the behavior of their wives,when they see the purity and reverence of your lives.

Your beauty should not come from outward adornment, such as elaborate hairstyles and the wearing of gold jewelry or fine clothes. Rather, it should be that of your inner self, the unfading beauty of a gentle and quiet spirit, which is of great worth in God’s sight.

For this is the way the holy women of the past who put their hope in God used to adorn themselves. They submitted themselves to their own husbands, like Sarah, who obeyed Abraham and called him her lord.You are her daughters if you do what is right and do not give way to fear.

Peter holds Sarah up as a holy woman of the past who submitted to her husband, Abraham, and did not give way to fear.

One account, in particular, highlights the tensions between the sexes regarding freedom, security, and the basis of decision making.  I will revisit this narrative from a decidedly biased, twenty-first century, female point of view, looking at how this rightly-heralded man of faith threw his wife under the proverbial camel, and how Sarah did not give way to fear.

Because of famine, Abram is going down to Egypt to buy grain.  He tells Sarai to inform the Egyptians that she is his sister so he will not be killed on account of her beauty.  Subsequently, she is taken into Pharaoh’s palace—think harem and concubine!  This experience must have been rife with reservations, rationalizations, and resentments.

The Lord has certainly called my husband on this journey, but did Abram check with the God of heaven regarding this partially true yet deceitful strategy to circumvent his fear of Pharaoh?  What might happen to me once I leave the comfort and safety of my family?  Will I be raped by Pharaoh?  Does Abram have plans to rescue me from Pharaoh and be my knight in shining goat’s hair?

If Sarai really loves me, she will do whatever is necessary to protect me.  She will respect my authority and say everywhere we go, “He is my brother.”  Besides, she really is my half-sister, so it is not selfish or sinful, but reasonable and rational.

That grievous goatherd sold me out to cover his own skin!  Abram does not cherish and protect me; I am nothing more than a bartering tool to be exchanged for his freedom.  Apparently, my security is a low price for him to pay!

Discussing this Event with My Husband

Certainly this story might be cast in a different light.

In discussing the account with my husband, he mentioned maybe Sarai felt honored to represent their family interests at Pharaoh’s court.  Really?  Is there some secret Prophetic Men’s Justification Club?  Now, to be fair to my husband, his response was tongue-in-cheek, and to be fair to Abram, maybe he thought Sarai’s fate would be the same whether or not she said Abram was her brother.  But my point is that Abram’s decision might have been a bitter point of contention between them had Sarai given way to fear.

Darker Times of a Covenant Marriage

Later in this couple’s history, Hagar the slave woman is cast out because she and her son have no share in God’s covenant promises to Abraham. During the darker times in my covenant marriage, I have felt that being in the desert with Hagar seemed more alluring than staying in a covenant relationship that is fulfilled only through death.

We are in good company, though, regarding this angst as it seems even the Divine is not exempt from the painful conflict associated with covenant relationships.  Before the covenant vows were even said, God was ready to destroy the Israelites and start again with Moses after their idolatry with a mysteriously appearing golden calf.

In that light it seems strange that God would bind himself in relationship with his wayfaring people who time and again strain that union through adulterous affairs.  In fact, the only release from covenant is found in death itself.

The death that was eventually offered to the Israelites is that which is ultimately offered to us today:  either accept and participate in the death, burial, and resurrection of his Son, or face the cataclysmic death of the covenant relationship like the Israelites experienced in the destruction of Jerusalem in 70 A.D.

There is Only One Option

The deeper, the longer, the more entangled that I become with my husband, the one that I intimately know and love, but with whom I am so painfully enthralled in irresolvable conflict, it becomes clear that the only option for this covenant is death.

I must either die to myself with the possible hope of resurrection to something both familiar and unknown, or our marriage will experience the obliterating finality of the destruction of Jerusalem in 70 A.D.  One thing is certain.  Death is excruciating, and death to self no less so.  Is it possible, like Sarah, to do what is right and not give way to fear when your husband leads you on what seems a reckless and potentially dangerous path?  Can one’s reservations and resentments be crucified and discomforts tolerated?  Can one’s fear of the Lord be greater than the fear of where her man might lead her?

Something is going to have to die, but only one death has hope of resurrection.

Death imagery is actually woven into the fabric of our universe, a divine parable whispered through creation.  Every night the sun “dies” and the light is extinguished only to be reborn with dawn, sometimes in glorious splendor.  Or take seeds falling to the ground with seasonal, earthy death, returning markedly changed and fruitful.  Though we wish to shirk death, we were born to die.  Not only that, death is also our hope.  Each time we die a godly death within the context of our covenants, in that paradoxical death, we plant the hope of resurrection.