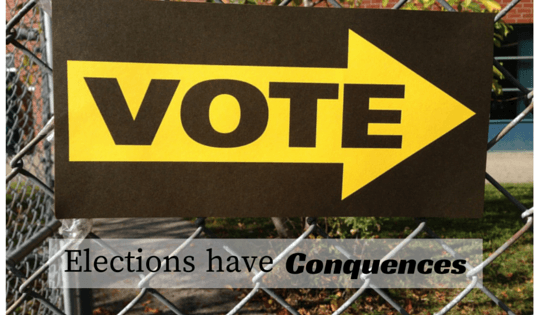 I know there are a lot of people out there who will probably be offended by this post.  But before you jump to conclusions, hear me out.  I’m not endorsing a candidate.  I’m not telling you who to vote for.  I truly believe that we must make informed decisions.

Many believe that as Christians, we should not be involved in politics, but we do need to be.  If we don’t, who will?  Are the people in office the ones that we want making our laws, representing us?

Then, of course, there is that separation of Church and state thing.  Guess what?  There is NO such thing!  I know.  You say, “But, it’s in the Constitution (Bill of Rights).”  WRONG!  Find it for me.  The first amendment of the Constitution states, “Congress shall make NO law respecting an establishment of religion, or prohibiting the free exercise thereof, or abridging the freedom of speech, or of the press; or the right of the people to peaceably assemble, and to petition the Government for a redress of grievances.”  (Emphasis added)

It says “…no law respecting the establishment of a religion…”  This means that Congress cannot establish a State religion.  This is why they left Europe.  They had State-sponsored churches like the Church of England.  Everyone was supposed to be a member of the state church and worship and believe in that manner.  They wanted to ensure that our Government would not do this.  “…or prohibiting the free exercise thereof…”  This clearly states that the Government will not interfere with our religion.  They will not tell us how to believe or how to worship.

Now that we have the background, let’s continue.

First and foremost, we must vote for a Christian.  This is someone who truly has a relationship with Christ and shows it in their actions.  We want someone who believes as we do passing laws for us to live by.  I’m not saying that non-Christians are to be excluded, but this nation was built on Biblical principles.  Saying it wasn’t or things have changed only diminishes what our founding fathers went through.

We must vote the Bible!  We cannot vote for SIN.  This is whether it is on state questions or for candidates.  Anything or anyone that supports sin should not get our support.  I am not saying that we should hate sinners because we are all sinners, but we are to flee from sin.  We should be voting for the sanctity of human life because God created all life and it is not man’s decision when to end that life.  This applies not only to abortion, but to euthanasia also.

We should also vote for those who will be fiscally responsible.  Jesus even tells us that we are to “render unto Caesar what is Caesar’s.”  (Luke 20:25)  But we are to entrust our money with those that will invest it wisely as with the nobleman in Luke 19:11-27.  If they have been wasting our money or are not themselves fiscally responsible, then we should not vote for them.

I have other criteria that coincide with my stance on other issues that I look at along with the above.  We must put God first in our voting decisions.

The most important thing we can do is pray.  We need to pray about who God wants us to vote for.  We should pray for a discerning spirit.  If we listen, God will tell us.

I have decided who I am not voting for; I have not decided who I am voting for.  I also believe that if you cannot chose a candidate, you do not have to pick the “lesser of two evils.”  Go to the ballot box and leave those races or questions blank.  Leaving it blank is still voting.  It is saying “I don’t agree with these choices.”

I believe this could be the most important election in our lifetime.  We must be politically active.  Please do not take it lightly.  God knows all that we do.  We must answer to him for those decisions.  Are you willing to stand before God and tell Him that you voted for a candidate who did not follow Him?

Are there any factors that you use to determine how you will vote?

Have you chosen your candidates yet?

Wow Kristi! Thanks for your input. I agree with almost everything. We need to be accountable and responsible Christians. We need to get informed. Read websites, watch debates avoid commentaries, and PRAY! We do not want to become people that mis-represent and smear the name of God and his Word. HE is in fact Holy. Shame on us. I also value the many Men and Women whom have sacrificed for me and for you to be Free. For that reason, I will always vote and have my one voice heard. GOD BLESS AMERICA!!

:o) She did write a superb article!

Thank you, Dawn. Luckily, I’m still undecided so that allowed me to right an unbiased post. I continue to pray that God will show me the right candidate. My husband is the one that told me about 12 years ago about answering to God for who we vote for and it has stuck with me since. My goal was to get people to think. For other insight, please read my post entitled Land of the Free, Home of the Brave if you haven’t already.