Driving Backwards Down the Parade of Life

My best friend and I love touring houses the way some people love watching football games. It’s an addiction. When we wander through an especially gorgeous house decorated in the style of a bygone era –touchdown! Of the many tours we’ve taken over the years, one foray stands out: the time we inadvertently joined a parade. 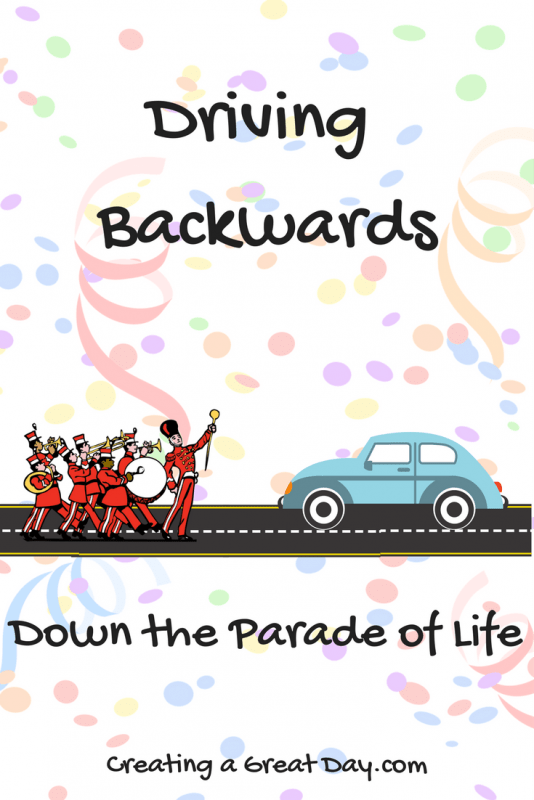 In the days before smart phones and GPS systems, my friend and I relied on memory, fuzzy at the best of times. We found ourselves driving up and down the streets of a small town looking for an elusive address. We turned onto a small side street and drove halfway down the block before hearing the music. A marching band headed straight toward us! Behind the band, a local (unadvertised) parade enthusiastically followed. We stopped. They didn’t. Obviously, the drum majorette and her crew felt they had the right of way.

Then we noticed the people lining the sidewalk. They stared, some laughing and pointing. Inside the car, four red cheeks burned in deep embarrassment. Only loyalty to my friend kept me from ducking onto the floorboard and cowering out of sight. Instead, I faced the music–er, parade–with her. I held my head high, albeit, with a protective hand between my face and the car window.

“What do I do?” asked my friend who was, thankfully, doing the driving.

“Hit the gas and play chicken” didn’t seem a suitable reply. The only advice I could muster was, “Put it in reverse and back up until we find a parking space.” So that’s what we did. Some of the crowd applauded as we reversed. Some waved. My mother’s admonishment to always “be polite’ echoed in my ears, and I waved back. Once safely in the parking space, my friend and I turned to each other and burst out laughing. No words, just laughter. I have to admit, after leading a parade in reverse, touring the house was a bit of a letdown.

Now let me say, I’m an introvert. So for me, messing up in front of others is akin to one of those dreams where you show up at school in your underwear, after having studied for the wrong test and you’re at the wrong school. Poise and elegance aren’t in my DNA.

Like most of us, I long to be perfect. But too often, my life consists of flaws, hiccups, and “I can’t believe I said that” moments. I’ve also had my share of moments driving backwards down the parade of life without a parking space in sight.

And that’s okay. In fact, I like to think I inspire others, or at least make them feel better about themselves. Maybe that’s my role as a Christian. People aren’t really interested in conversing with saints. They want to meet sinners, like themselves, that God has redeemed. Isaiah 64:8 says,

“But now, O LORD, You are our Father, We are the clay, and You our potter; And all of us are the work of Your hand.”

If God can take my lumpy clay and mold me into something wonderful, then surely he can do the same for others.

And if I’m going to be even a little bit of an example, maybe it’s to show we shouldn’t let our insecurities have such a stranglehold on us. Take that parade. My friend and I didn’t quite panic, but we certainly were embarrassed. However, we went with it. That’s how life is. Sometimes you watch the parade, and sometimes, those very rare times, you get to lead it. Just don’t be so afraid of making a fool of yourself that you miss the parade entirely. 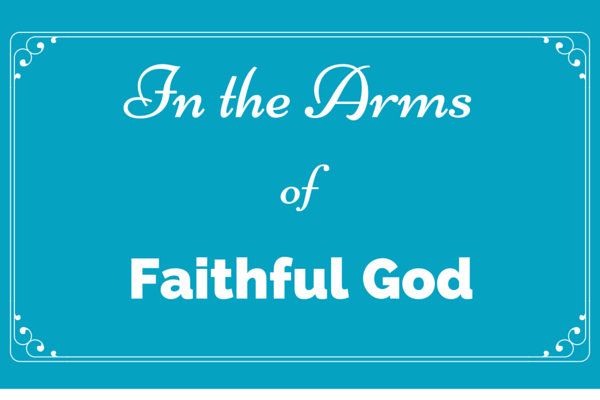 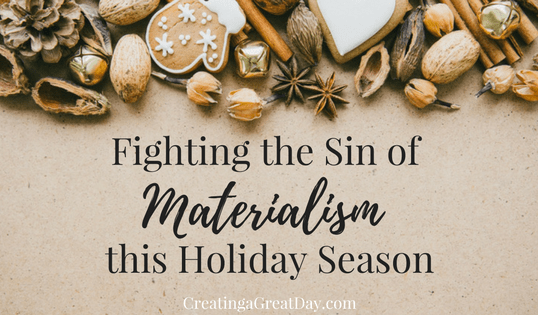 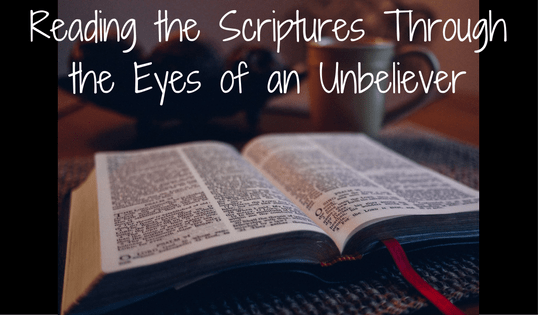 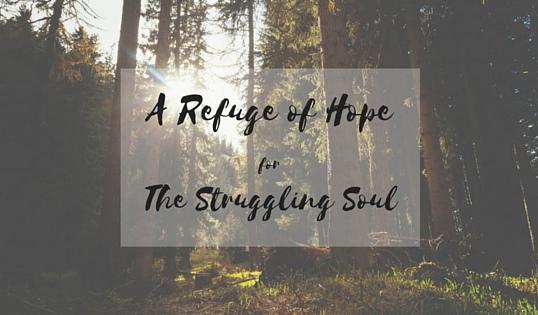 Follow Susan
Susan
Susan York Meyers is the author of several children’s books, including the picture book, Grrr…Night! for which she won the Creative Women of Oklahoma Award. If you enjoy Susan’s humor, check out Two Little Old Ladies: It’s all in the Attitude, a humorous inspirational book combining both fiction and devotionals. Susan lives with her hubby and Kira, the dog that thinks she’s people. You can find out more about Susan and her books at susanameyers.com. Sign up for her newsletter which comes out four times a year.

Wonderful reminder. I know that I tend to stray away from anything that could be potentially “embarassing” or uncomfortable, but sometimes God pushes us righ into the parade, so we should remember to enjoy the ride!

Susan A Meyers
Reply to  Hannah

Exactly! We need to enjoy the ride.:-)

Thank goodness God molds us and makes us new! You do inspire others with your beautiful writing, so keep up the good work!

Thank you so much!

I love how you waved back to the crowd. That made the situation more enjoyable for everyone, even if you were embarrassed.

oh yes! if We believe God has done us good, He’s faithful to us by ensuring there is good for others around us. holding on is the key!

I don’t know how I’d make it without God. His wisdom certainly is a lot more reliable than mine.:-)

Oh, My Friend, you had me laughing most of your article, which I’m sure is what you meant to do, and you delightfully made my day. Thank you for your words of wisdom! x

Thank you for taking the time to tell me.:-)

I’m so thankful that I am more than my mess-ups and imperfections! God continues to mold and shape and refine me. My past hiccups are reminders of how far I have come because of my faith and obedience to God.

Susan A Meyers
Reply to  Melissa

Oh, my gosh, I am so thankful God looks past my imperfections! (as do, thankfully, most of my family and friends)

Susan A Meyers
Reply to  Heather

I love that song!

I once told the Lord I hated my big mouth. He then told me He was going to use it. While o have embarrassed myself plenty of times, God has used me to speak truth.

I sometimes thinks He looks for our flaws just so He can make them into assets.

Love the story about the parade! That is an unforgettable memory! I mess up and make a fool of myself often, I think God enjoys humor:)

Susan A Meyers
Reply to  Julie

I think God definitely has a sense of humor.:-)

Hilarious story! And I love your spiritual application of it. Rolling with it seems to be a theme for me right now. For people who like to retain control, it’s tough! But we learn in the midst of driving backwards leading a parade, that God’s gone before us, and He never leaves. He is always Faithful! Thanks for sharing your story!

Susan A Meyers
Reply to  Alicia

I’m so glad you enjoyed it. “God’s in charge” is my mantra.

Not only does this type of attitude make us more relatable to others, but it makes life more enjoyable as well! Thanks for the laugh!

Susan A Meyers
Reply to  Kristin

I loved your story – what a fun memory! I so loved when you said “Maybe that’s my role as a Christian. People aren’t really interested in conversing with saints. They want to meet sinners, like themselves, that God has redeemed.”

Amen, sister! That is exactly IT! May we all remember that we are redeemed sinners, not saints. Thank you for sharing what He’s been speaking into and over you!

Susan A Meyers
Reply to  Merry

Thank you! I appreciate you taking the time to post.

I love that you chose to have fun than to be embarrassed and turning it into a learning experience.i enjoyed reading the story ,I will this too

I love this post! What a great reminder about how to live life as our imperfect, but just right selves. 🙂 Plus your stories are so funny and enjoyable to read. Keep it up! You are definitely inspiring others on your journey.

Thank you! I appreciate your taking the time to tell me you enjoy my writings.