Cast Your Cares on Him–Not Control Them 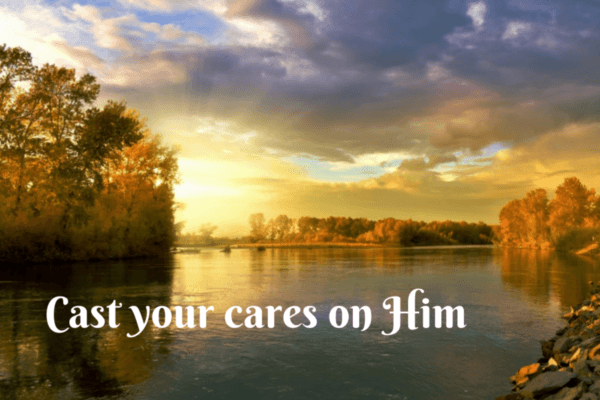 Cast Your Cares or Control Them?

I Peter 5:7 says, “…casting all your anxiety on Him, because He cares for you.”  I have read that verse so many times that I have memorized it.  We are supposed to give everything over to God, but that is so much easier said than done (especially for a control freak like me).  I knew I had to give my worries over to God, but I didn’t know how to do that.  After hearing the song “Cast My Cares” by Finding Favour on the radio so many times, I would cry when I heard it because I knew God was talking to me and I knew I was not obeying Him.

When my husband had his heart attack, I was so distraught.  I was trying to do everything and control everything.  I was having a very difficult time dealing with all that was going on in our lives.  It was at that time that I ran into a strong Christian friend.  (Funny how God does that.)  We started talking and I broke down.  She reminded me that I needed to give it over to God.

I looked at her and said, “I know I’m not supposed to worry, but I don’t know what that is supposed to look like.”

I could not believe that those words came out of my mouth.  Of course I knew what God’s word said.  So many times, I had quoted that scripture, 1 Peter 5:7, but I did not know how to live it.

Many times in my life I thought I had given my problems to God, but I had either given them to Him temporarily or not at all.  I would hold on to it.  I did not know what I needed to do to achieve this.  We are not being obedient to God if every time we pray and “give” him a problem, we turn around and five minutes later “pick it up” and start worrying about it again.  We are telling God that we do not need Him and we do not have faith that He will take care of us and provide for us. 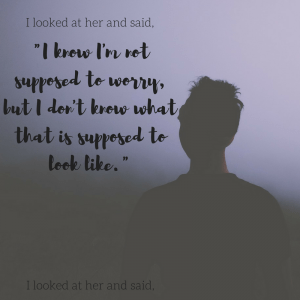 Do You Pray About Your Cares?

Prayer is always the answer.  If we are praying and talking to God about our problems, then we cannot be worrying about them.  This is a constant struggle.  When we go to God with our problems, we should not just say a prayer and move on.  Ask Him to take them away.  Then in five minutes, when you want to “pick that problem” back up, pray again.  Continue to do this until you stop “picking it back up.”  God is bigger than all of us.  He can handle all of our problems.  (Of course, I say all this as I write this at 4:00 a.m.)

I will not say that I am at a point where I cast my cares on Him and am immediately over it.  That is going to be very difficult for a control freak like me.  I am working on it, though.  I have made great strides within the last few weeks.  It becomes easier each day.

Is there a care that you are not giving over to God?

Are you holding on to past struggles?

Are you ready to cast your cares on Him? 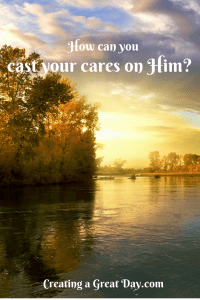 I hear you on this one! I just have to remind myself that God is our patient and loving Father, and He knows that during this life we will struggle, yet He is always there to encourage, remind and love on us as we stumble. And yes praying always is the perfect way to keep this truth in mind.

Yes, it is so important to keep our focus on Him. This was so eye opening for me.

Exactly what I needed to read right now! Thank you!
God is GREAT!
-Heather

I’m glad this was helpful.
God is great all the time!

Raki (Outside the Box Mom)

This is so hard to do! I find myself picking my cares back up to after I’ve cast them. So glad to hear that it gets easier with time.

Toni D(@tonidennis)
Author
Reply to  Raki (Outside the Box Mom)

It’s a daily struggle. We just have to continue to remind ourselves to leave it with Him.

I am the worst for this, I give “it” to God then I take it back, and give it to him all over again!
Praying for others is super easy but praying my own cares is a little harder.

I understand the feeling of worry but as of late i
I feel like I have to hand Him my burdens. I now dont worry about anything because I pray about everything.

That’s great that you have been able to give it over to Him and leave it there with Him. Prayer is the key.

I am a severe control freak! This is something God has been working on me about for this entire year… I always want to fight my own battles, but I know now that only God can do this for us. We have to trust Him day by day. Great post!

It takes some of us longer than others to learn. I too am a control freak and I think that that is what this all comes down to – who is in control? Us or God?

Wow Toni, I can’t believe your husband had a heart attack. I’m very sorry. How’s he doing now? I’m guessing you’ve probably discussed that in a previous post…or post. Hope you don’t mind answering one more time. I’m sure this was quite the opportunity to cast your cares on God.

Thanks for sharing so transparently.

Yes, I discussed it in my post “Spared”. He is doing fine now. Even the Doctor said that it was a miracle that he survived. This experience really taught me so much and writing this blog has really helped me to be more aware of how God is working in my life.

What a beautiful post. I need to be better about casting all my cares to him!

Thank you. I think so many people struggle with this.

Love this reminder and love this song. Thanks for sharing something we need to do daily!