I Want To Be A Snake! 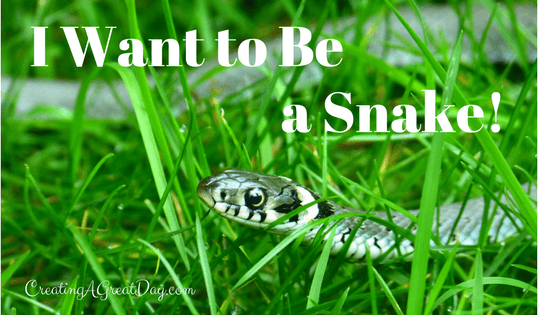 My pastor recently preached on a verse in the Bible about snakes.  It is one of those verses that everyone has read but most probably do not stop to think about it.

In the Bible, snakes are always associated with evil.  In Genesis, the serpent told Eve that she would not die if she ate of the fruit.  Satan is always described as a slithering, evil serpent.  I always associate snakes with evil…but, now I want to be like one.

In Matthew 10:16 (NASB), Jesus instructs his disciples as He is sending them out, “Behold, I send you out as sheep in the midst of wolves; so be shrewd as serpents and innocent as doves.” (emphasis added).  Did you read that?  Shrewd as serpents!  We are to be cunning, alert.

An example of this is when the Pharisees tried to trap Jesus in Matthew 22:15-22.  They tried to get him to speak against Caesar in regards to taxes.  Jesus knew what they were up to!  But, he was shrewd and told them, “Then render to Caesar the things that are Caesar’s; and to God the things that are God’s.” (verse 21b).

I always think of Jesus in Bible times as being a healer.  He went around teaching and being kind.  I thought everyone viewed Jesus that way.  After that sermon, my daughter asked how we viewed Jesus.  I gave her my answer and asked her for her thoughts.  She and my husband reminded me that Jesus also overturned the tables in the temple (Matthew 21:12-13).  They saw him as bold and correcting wrongs.  We want to be “Christ-like” but we do not want to rock the boat.  We only want to give the nice, kind answers.  But Christ called people out.  He was kind about it, but he did correct them.  Remember the woman at the well in John 4:7-26.

We need to be shrewd about our faith and how we share it and bring people to Christ.  Be a snake!

Do you want to be a snake?

It was, and very thought provoking! I know I didn’t do it justice.

I had never looked at a snake that way before. I will have to give this some thought. “Shrewd as serpents! We are to be cunning, alert.” We certainly do need to be on alert for evil.

Yes, this sermon spoke to me on so many levels.

I had never heard that said that way before! Such a great insight

This is such an interesting topic!! So true we are not only called to love, but also to remind each other of God’s holiness and revere Him!

I know! Our pastor has really been digging deep lately. God is really speaking to and through him right now.