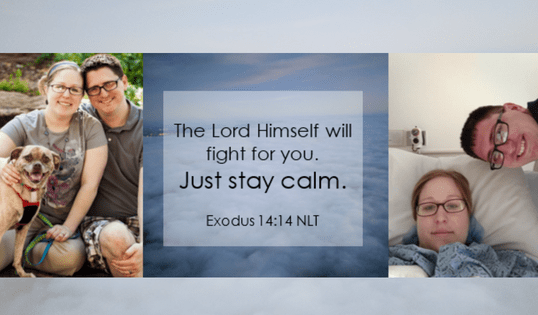 I’ve never been a calm person. How was I supposed to be calm with all of these things going on around me? In what way could God be fighting for me when I was in so much physical pain and mental anguish?

When My Dream Life Crumbled

In spring of 2013, I was living my life’s dream! Not only was I married to my best friend, but I was a very active music teacher. Nothing seemed to slow me down until my right hip started hurting. This was out of the blue, so I immediately went to see the doctor. Months of pain eventually led to the diagnosis of a torn labrum. I had surgery and we thought that was the end of it. Instead, this was the beginning of a long journey through pain and hardship to God’s lessons and blessings that I am only now discovering.

My left side eventually tore as well and I was officially diagnosed with hip dysplasia at the age of 25. In the simplest terms it is a misalignment of the hip joint, which is usually diagnosed at birth or in early childhood. They never could figure out if I was born with it or if it developed over time. As the next few years passed I continued to have more tears and failed surgeries.

In 2016, it was then decided that the more permanent solution was to break my hip and reset it. (The whole explanation is complicated but the surgery is called a PAO.) I was angry, scared, and frustrated.

Did God Leave Me?

God was supposed to take care of me and yet here I was in the middle of the biggest battle of my life!

We were referred to Duke University in North Carolina. This meant multiple trips on planes and staying in hotels just to visit the doctor. When the surgery day finally came, I tried to be brave and rely on my own strength. But underneath it all, I was scared. How was I going to survive the pain I knew was coming and a year-long recovery? Would I be able to teach again? If I couldn’t teach again, what else did God want me to do with my life? We wanted a family but how was I going to do that now?

The next five days in the hospital were a living nightmare. I was at a constant pain level of 10. (The pain I experienced is compared to child birth or breaking your femur.) I was angry and beyond frustrated. They struggled to keep my pain managed but couldn’t do much. Aaron, my husband, was there even when I wasn’t the most pleasant. I tried to color, which usually soothed my spirit, but the pain was too much. It felt as if God had left me. I felt emotionally abandoned and alone.

Things didn’t get much better after we left. I spent weeks and months at home in bed. Isolation and pain turned into depression. I only left the house for doctor’s appointments and church.

Just when I thought things couldn’t get any worse, in November of 2016 I was diagnosed with a staph infection in my left hip. They tried to take care of it but in March of 2017, Duke discovered that the infection went all the way to the screws and into the bone. They put in a PIC line and I had to give myself antibiotics every day.

A month after this (April 2017), I returned to Duke to have them break my right side. All the fear returned twofold and the experience was even worse than the first. I was at my lowest point. I struggled with my faith, wondering why God would put me through all of this.

The Continued Struggle with Rays of Hope

The summer of 2017 was a constant battle. I wanted to get better but I was sick all the time from the constant pain, medication, and antibiotics. Slowly, things improved. I began walking, doing small chores, and colored like a mad woman. I’m not sure what helped to improve my outlook that summer but my biggest goal was to return to teaching for the Fall of 2017. I missed my students so much! (I tell them all the time that they are my kids since we don’t have our own yet.)

When I returned to teaching, I was so happy but that didn’t last for long. Every day was a struggle.  I would come home from work to only crawl in bed and not get up till the next morning. I was glad to see my students but the physical pain and mental stress was great. I was not always the most pleasant person and stress was magnified ten-fold. I began to wonder if I was going to be able to teach like this. I had always felt God had called me to teaching. If that was true, what was he wanting from me now?

A Hip Replacement at My Age!?!

Around February 2018, I had had enough! I started calling my doctors telling them that I was still in too much pain. Duke told me that there was nothing else they could do for me. Anything that they might do could be done here at home. I was referred to a local hip replacement specialist. Hip replacement, at 29 or 30 years old? You might say they were crazy but this time, for some reason, I had faith. This was my last chance at a normal life. All of the other surgeries I had been thorough had failed, but this one seemed to offer hope.

I pushed through to the end of my most stressful year of teaching and I had my first hip replacement on my left side, June 1st, 2018. Within 10 hours of surgery, they had me up and walking. I certainly didn’t want to get up. (Who would want to do that after any surgery?) I had many prayers and visitors from our church family. The support was invaluable. The next day, I was able to sit up in a chair and color. I was discharged that afternoon, walking with a walker on my own power.

Every day, things improved. Within a week, I was walking with a cane and at two weeks, no cane.  This surgery and recovery has been the easiest I have ever been through. I can drive, do chores around the house, and walk a good distance before I have to sit. I did well enough that I had my right hip replacement July 27th, 2018. I pray that this will be the last surgery that I have to have for the next 20-30 years.

God was Fighting for me!

Through all this, God was fighting for me. I greatly struggled to “be still” and see what He was doing during all of this. He has been building me up to serve others whom are going through a physical, mental, or emotional struggle in their lives. Just as I needed encouragement, they need it too.

They need someone, outside of themselves, who can sympathize with them. (I will never claim to know exactly what someone is going through.) I have begun blogging about my experiences and sharing encouragement to anyone whom may need it. I also am constantly trying to encourage the people around me.

God has given me a whole new view of the life He’s given us. He has never promised that our lives will be free of pain and struggles. But He has promised that He will fight for us if we will only let Him and BE STILL. 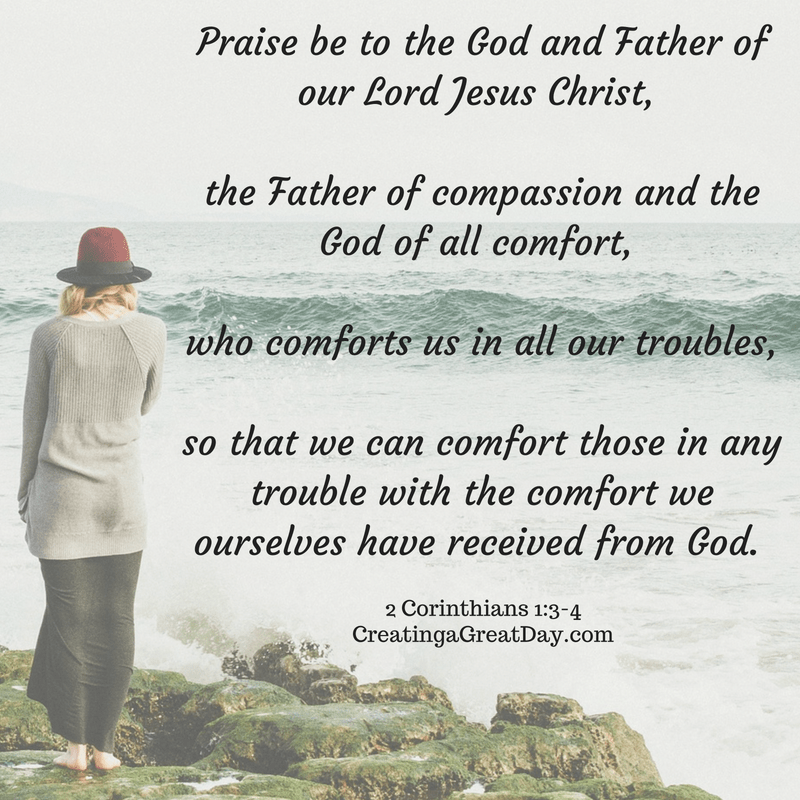