A Time to Pray and Listen 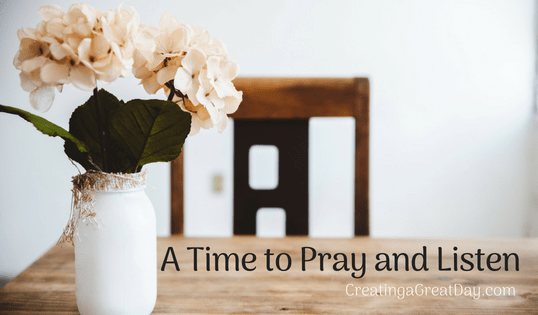 As we walk along with God, we must take the time to pray and listen.  In doing this, we can understand when to go, even if we don’t understand the why and what for at the exact moment.

A Time to Pray and Listen.

Taking the time to pray and listen to the One who holds our future is so important. He reveals bits and pieces to us along our daily journey. Sometimes, he says, “Just trust me and go.” Other times, he gives us something more tangible.

Early this year, through prayer I knew–KNEW–I was supposed to step out and take on a leadership role in our homeschool community. So I went through the process. I did the interviews and the training. I went through everything.

A few months later, something else happened in our lives and it took me aback a little. Just a little.

Beginning to question what God had called me to step up and do, I remember thinking, “God you specifically told me to step out and do this.”  I knew without a shadow of a doubt that it was something I had to do, so why now was this other situation happening?

The answer came in the form of a picture. Being a visual person, I see pictures before the words ever come. I saw Phillip talking to the Ethiopian eunuch, baptizing him, and then being whisked away.

You see, I hadn’t missed my calling. But I may have misinterpreted the reason.

I’m still praying on this one, because honestly it still isn’t completely clear what the next step will be. But what I do know is that God has a plan. His plan is not for me to necessarily stay comfortable in the role he has called me to fulfill.

I quickly realized that my job is to trust and follow him wherever he may ask me to go.

With Phillip, God needed him to talk to the Ethiopian eunuch. Once that task was finished, the Holy Spirit whisked him away in what I visualize as a small tornado!  LOL! (It doesn’t say that, but that’s what I visualize.)

“Now an angel of the Lord said to Phillip, ‘Go south to the road–the desert road–that goes down from Jerusalem to Gaza.'”

Look at how specific that is!  He had a clear picture of exactly where he was supposed to go. When we take time to pray and listen, we can hear our Lord’s directions.

“So he started out, and on his way he met an Ethiopian eunuch, an important official in charge of all the treasury of Candace, queen of the Ethiopians. This man had gone to Jerusalem to worship, and on his way home was sitting in his chariot reading the book of Isaiah the prophet. The Spirit told Philip, ‘Go to that chariot and stay near it.’

Then Philip ran up to the chariot and heard the man reading Isaiah the prophet. ‘Do you understand what you are reading?’ Philip asked.

‘How can I,’ he said, ‘unless someone explains it to me?’ So he invited Philip to come up and sit with him.”

Did the Lord reveal the whole plan before Philip moved?

Did you notice that the Lord didn’t reveal his whole plan at once but once Philip started obeying and going along, he gave a little more direction?

First, the Lord told him to go south on the desert road. So Philip started going down that road.

Then, the Lord told him to go hang out next to the chariot. Boom! Once he was given more specific direction, Philip didn’t waste anytime. He ran!

Then, he waited!  He waited for an invitation from the Ethiopian eunuch to share about Jesus.

“Then Philip began with that very passage of Scripture and told him the good news about Jesus. As they traveled along the road, they came to some water and the eunuch said, ‘Look, here is water. Why shouldn’t I be baptized?’ And he gave orders to stop the chariot. Then both Philip and the eunuch went down into the water and Philip baptized him.

When they came up out of the water, the Spirit of the Lord suddenly took Philip away, and the eunuch did not see him again, but went on his way rejoicing.

Philip, however, appeared at Azotus and traveled about, preaching the gospel in all the towns until he reach Caesarea.”

Walk in Trust and not in Details

Sometimes we want to know the whole plan before we get moving, but that is when we need to walk in trust and not the details. It’s not a bad thing to ask God, do we go now or wait, but in order to do that we have to pray and listen. And once we have an answer we must start walking. 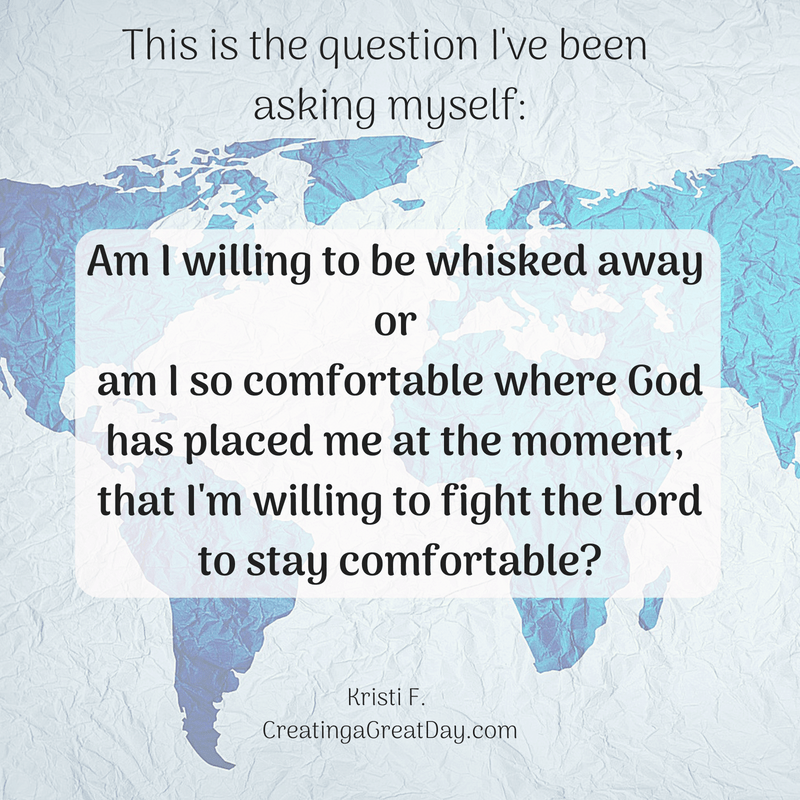 We cannot let our comfortableness in a situation keep us there. We must be willing to go about our Lord’s work, just like Philip was. God literally whisked him away the moment he accomplished what he needed to do with the eunuch.

Are We Willing to be Whisked Away?

This is the question I’ve been asking myself lately. Am I willing to be whisked away or am I so comfortable where God has placed me at the moment, that I’m willing to fight him to stay comfortable?

I don’t want to fight God, but sometimes, I inadvertently do. I put my comfortableness before his calling.

I think it is ironic that in the above situation, I hunkered down in what I thought he had called me to do, not realizing that maybe he just needed me there for a briefer reason than I initially realized. Maybe, God has a bigger plan than I can’t see. Maybe, just maybe, I was focusing on harvesting when he was only asking me to water.

But here’s the thing: As of yet I don’t know His timing and when He will call me away from it, so I will continue to walk in obedience until he points me otherwise.

How will I know? By taking the time to pray and listen.

Friend, I encourage you to take time to do the same.

Prayer is powerful and a powerful gift to give!

Your writing and video reflect what my heart has been wrestling with this year- surrender! However, I have found that His goodness has unfolded abundantly in my life through that surrender. Why are we so scared? When our daughters are upset or worried about not having something right away we often tell them, “Mommy and Daddy will always take good care of you. You don’t have to be worried.” Oh, how I often need to remember the sane truth applies with my Heavenly Father!